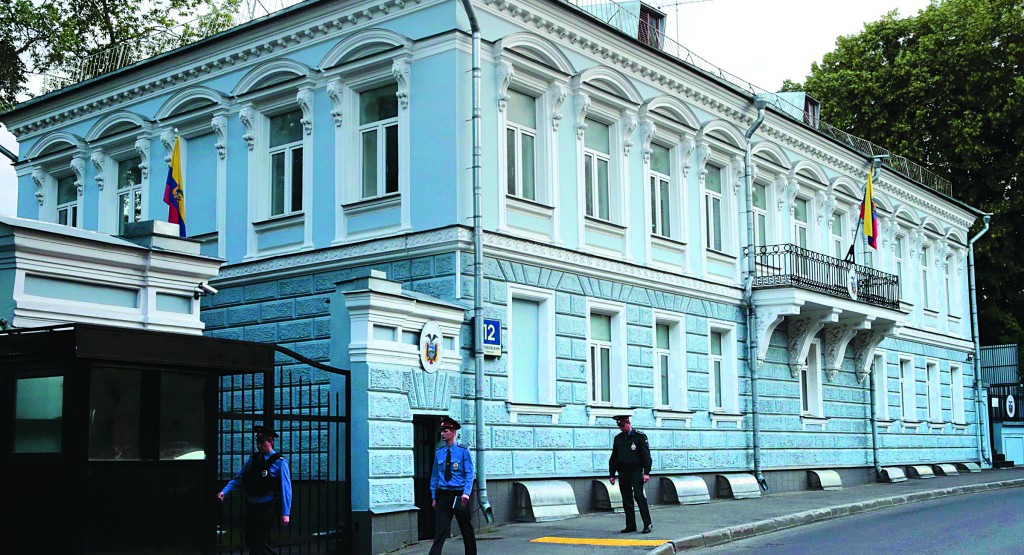 Fugitive former U.S. spy agency contractor Edward Snowden is seeking asylum in Ecuador, the Quito government said on Sunday, after Hong Kong let him leave for Russia despite Washington’s efforts to extradite him on espionage charges.

In a major embarrassment for the Obama administration, an aircraft thought to have been carrying Snowden landed in Moscow, and the anti-secrecy group WikiLeaks said he was “bound for the Republic of Ecuador via a safe route for the purposes of asylum.”

Ecuador has been sheltering WikiLeaks’ founder Julian Assange at its London embassy for the past year, and Ecuador’s ambassador to Russia said he expected to meet Snowden in Moscow.

Snowden, who worked for the U.S. National Security Agency in Hawaii, had been hiding in the former British colony, which returned to China in 1997, since leaking details about U.S. surveillance activities at home and abroad to news media.

U.S. authorities had said only that they were optimistic Hong Kong would cooperate over Snowden.

Influential Democratic Senator Charles Schumer charged that Russian President Vladimir Putin likely knew and approved of Snowden’s flight to Russia and thought Beijing was involved. He said that will “have serious consequences” for a U.S.-Russian relationship already strained over Syria and human rights.

“Putin always seems almost eager to stick a finger in the eye of the United States — whether it is Syria, Iran and now of course with Snowden,” Schumer told CNN.

“It remains to be seen how much influence Beijing had on Hong Kong,” he said. “As you know, they coordinate their foreign policies and I have a feeling that the hand of Beijing was involved here.”

In their statement announcing Snowden’s departure, the Hong Kong authorities said they were seeking clarification from Washington about reports of U.S. spying on government computers in the territory.

A spokesman for the Hong Kong government said it had allowed the departure of Snowden — considered a whistleblower and a criminal or even a traitor by his critics — as the U.S. request for his arrest did not comply with the law.

In Washington, a Justice Department official said it would seek cooperation with countries Snowden may try to go to and sources familiar with the issue said Washington had revoked Snowden’s U.S. passport. State Department spokeswoman Jen Psaki said revoking the passport of someone under a felony arrest warrant was routine.

“Such a revocation does not affect citizenship status,” she said.

The White House had no immediate comment on Sunday’s developments.

WikiLeaks said Snowden was accompanied by diplomats and that Harrison, a British legal researcher working for WikiLeaks, was “accompanying Mr. Snowden in his passage to safety.”

“The WikiLeaks legal team and I are interested in preserving Mr. Snowden’s rights and protecting him as a person,” former Spanish judge Baltasar Garzon, legal director of WikiLeaks and lawyer for Assange, said in a statement.