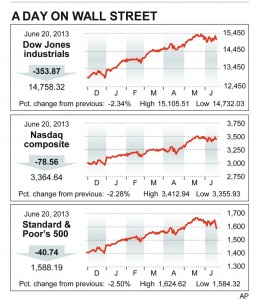 For investors, there was no place to go on Thursday.

A day after the Federal Reserve roiled Wall Street when it said it could reduce its aggressive economic stimulus program later this year, financial markets around the world plunged. A slowdown in Chinese manufacturing and reports of a squeeze in the worldsecond-biggest economy heightened worries.

The global selloff began in Asia and quickly spread to Europe and then the U.S., where the Dow Jones industrial average fell 353 points, wiping out six weeks of gains.

But the damage wasn’t just in stocks. Bond prices fell, and the yield on the benchmark 10-year note rose to 2.42 percent, its highest level since August 2011, although still low by historical standards. Oil and gold also slid.

The question now is whether the markets’ moves on Thursday were an overreaction or a sign of volatility to come. What is becoming clearer is that traders and investors are looking for a new equilibrium after a period of ultra-low rates, due to the Fed’s bond-buying, which spawned one of the great bull markets of all time.

It doesn’t mean the stock run-up is over. After all, the S&P 500 is still up 11.4 percent for the year and 135 percent since a recession low in March 2009. But it may suggest the start of a new phase in which the fortunes of the stock market are tied more closely to the fundamentals of the economy.

And that might not be a bad thing. The reason the Fed is pulling back on the bond-buying is because its forecast for the economy is getting brighter.

The job market is improving, corporations are making record profits and the housing market is recovering.

“People are overreacting a little bit,” said Gene Goldman, head of research at Cetera Financial Group. “It goes back to the fundamentals, the economy is improving.”

The Dow’s drop Thursday – which knocked the average down 2.3 percent to 14,758.32 – was its biggest since November 2011. It comes just three weeks after the blue-chip index reached an all-time high of 15,409. The index has lost 560 points in the past two days, wiping out its gains from May and June

Small-company stocks fell more than the rest of the market Thursday, a sign that investors are aggressively reducing risk. The Russell 2000 index, which includes such stocks, slumped 25.98 points, or 2.6 percent, to 960.52. The index closed at a record high of 999.99 points Tuesday. 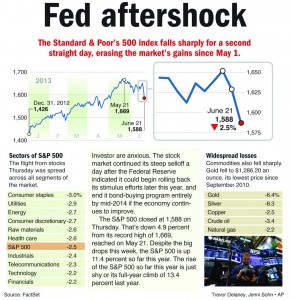 The yield on the 10-year Treasury note rose to 2.42 percent, from 2.35 percent Wednesday. The yield, which rises as the price of the note falls, surged 0.16 percentage point Wednesday after the Fed’s comments. It’s up sharply since May 3, when it hit a year low of 1.63 percent.

A Fed policy statement and comments from Chairman Ben Bernanke started the selling in stocks and bonds Wednesday.

Bernanke said that the Fed expects to scale back its massive bond-buying program later this year and end it entirely by mid-2014 if the economy continues to improve.

The bank has been buying $85 billion a month in Treasury and mortgage bonds, a program that has made cheap for consumers and business. It has also helped boost the stock market.

Markets were also unnerved after manufacturing in China slowed at a faster pace this month as demand weakened. That added to concerns about growth in the world’s second-largest economy. A monthly purchasing managers index from HSBC fell to a nine-month low of 48.3 in June. Numbers below 50 indicate a contraction.

A big jump in the so-called overnight lending rate in China also unsettled investors, said Brad Reynolds, a financial advisor at LJPR. The rate measures how much banks charge each other to borrow short-term money. The People’s Bank of China was forced to pump about 50 billion yuan, about $8 billion, into the Chinese financial system to alleviate the squeeze, Bloomberg News reported.

In currency trading, the dollar rose against the euro and the Japanese yen.

Traders sold gold as its appeal as insurance against inflation and a weak dollar faded. Both became less of an issue after the Fed said it was contemplating an end to its bond-buying program.

The rising dollar pushed oil prices lower. A stronger dollar makes oil more expensive for holders of other currencies. The price of crude oil fell $2.84, or 2.9 percent, to finish at $95.40 a barrel in New York, its biggest drop since November

This article appeared in print on page 1 of the June 21st, 2013 edition of Hamodia.