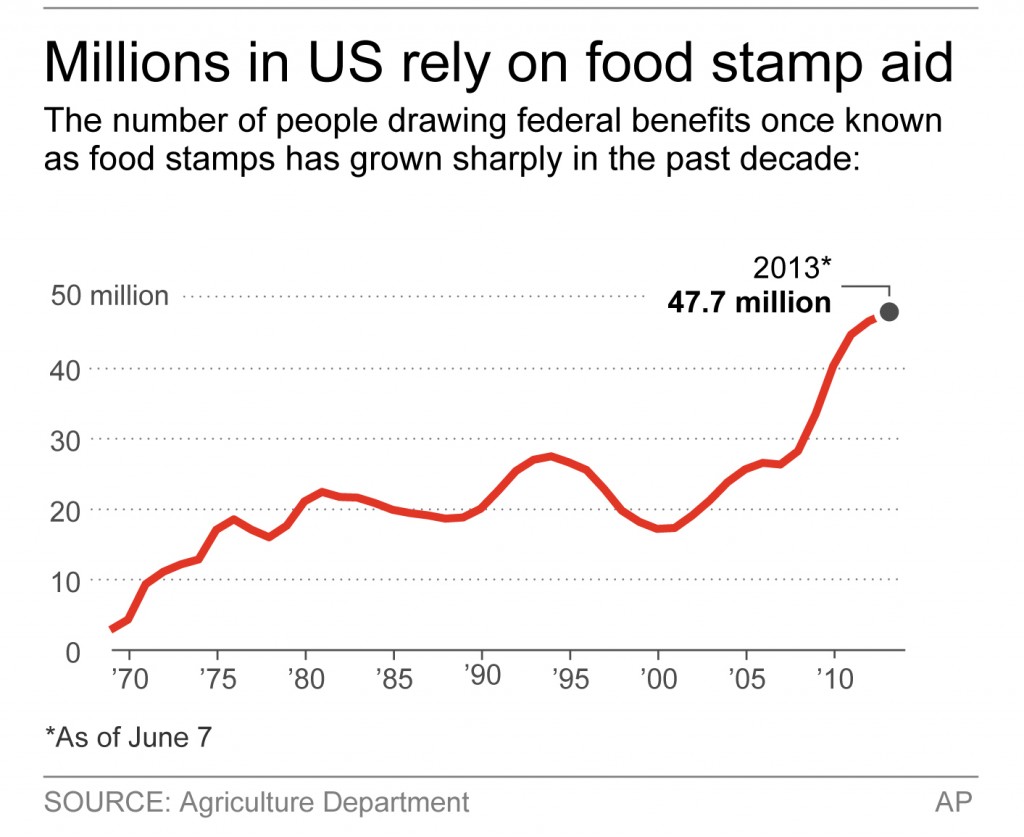 The House rejected a five-year, half-trillion-dollar farm bill Thursday that would have cut $2 billion annually from food stamps and let states impose broad new work requirements on those who receive them.

Those cuts weren’t deep enough for many Republicans who objected to the cost of the nearly $80 billion-a-year food stamp program, which has doubled in the past five years. The vote was 234-195 against the bill, with 62 Republicans voting against it.

The bill also suffered from lack of Democratic support necessary for the traditionally bipartisan farm bill to pass. Only 24 Democrats voted in favor of the legislation after many said the food stamp cuts could remove as many as 2 million needy recipients from the rolls. The addition of the optional state work requirements by Republican amendment just before final passage turned away many remaining Democratic votes the bill’s supporters may have had.

Majority Leader Eric Cantor (R-Va.), and No. 2 Democrat Steny Hoyer of Maryland, both of whom voted for the bill, immediately took to the House floor and blamed the other’s party for the defeat.

Hoyer suggested that Republicans voted for the food- stamp work requirements to tank the bill.

House Agriculture Committee Chairman Frank Lucas (R-Okla.) has argued the bill is necessary to avoid farm crises of the past and that it has some of the biggest reforms in years. The measure would have saved around $4 billion after new subsidies were created for crop insurance, rice and peanut farmers.

The Senate overwhelmingly passed its version of the farm bill last week, with about $2.4 billion a year in overall cuts and a $400 million annual decrease in food stamps — one-fifth of the House bill’s food-stamp cuts. If the two chambers cannot come together on a bill, farm-state lawmakers are likely to push for an extension of the 2008 farm bill that expires in September.

Though passage has been in the balance all week, the final vote against the bill was larger than many expected. When the final vote count was read, House Democrats cheered loudly, led by members of the Congressional Black Caucus who had fought the food-stamp cuts. The defeat is also a major victory for conservative taxpayer groups and environmental groups who have unsuccessfully worked against the bill for years.