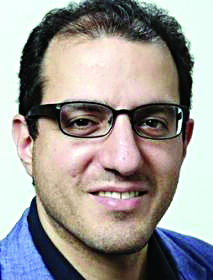 A Syrian Jewish technology executive is exploring a run for New York City mayor as an independent, casting his bulging rolodex of contacts, digital savvy and moneyed background to overcome the disadvantage of jumping in so late.

Jack Hidary told The New York Times that his Bloombergian mix of fiscal conservativeness, social and environmental liberalism and ability to bring hi-tech to his operations may put his long-shot candidacy over the top come November.

But the current mayor was then running after two terms in office. Back in 2001, he ran as a Republican in order to avoid the crowded Democratic field. Like Hidary, Bloomberg also declared his candidacy in June of that year. He was considered a dark horse until days before the general election, when his natural money advantage pushed him over the top.

Hidary, 44, is a member of the Ocean Parkway Sephardic community, according to his website which quietly opened recently. It adds that he is focused on clean-energy technology and policy, and is “a leading proponent of switching over the taxi fleet to high mileage hybrids.”

In an email to Hamodia, Taxi and Limousine Commissioner David Yaasky confirmed that as a city councilman in 2005, “Jack was a vocal supporter” on taxi mileage.

A member of the TLC staff said, on condition of anonymity, that he “personally know[s] this to be very true of Jack,” that he was a committed environmentalist.

Hidary said that he made his money helping financial and technology companies find quality employees. Together with former President Bill Clinton, he is a founding member of the Clinton Global Initiative, which brings government together with the private and non-profit sectors to solve problems.

He told the Times that he is not inclined to dip into his own resources for a mayoral bid, preferring to run a campaign funded by individual donors. But he assured that “if I did run, it would be a very viable candidacy.”

As an independent, Hidary joins former Bronx borough president Adolfo Carrion Jr. But both political party fields are already crowded, and even the mogul slot is filled — Republican John Catsimatidis, a supermarket and oil magnate, has promised to pour whatever it takes into winning.

But Hidary said that with most of the realistic candidates talking about curbing security and pro-business measures instituted by Bloomberg, many New Yorkers are encouraging him to run.

“They say, ‘Jack, we are really, really worried about New York after Bloomberg,’” Hidary said.

This article appeared in print on page 1 of the June 21st, 2013 edition of Hamodia.