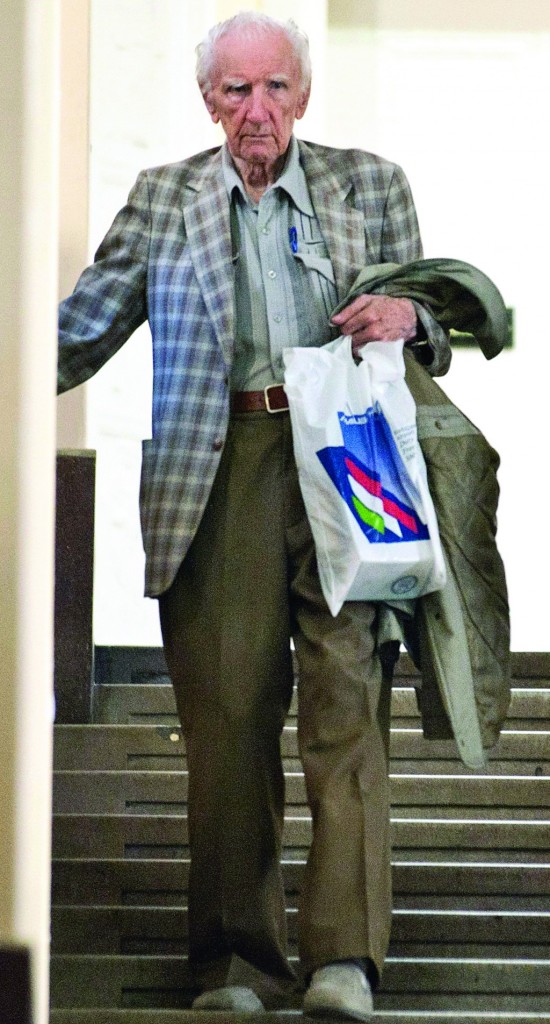 They said Laszlo Csatary was the chief of an internment camp for 12,000 Jews at a brick factory in Kosice — a Slovak city then part of Hungary — in May 1944, and that he beat them with his bare hands and a dog whip.

He also allegedly refused to allow ventilation holes to be cut into the walls of a railcar crammed with 80 Jews being deported.

With his actions, Csatary “willfully assisted in the unlawful execution and torture of the Jews deported from [Kosice] to
concentration camps in territories occupied by the Germans,” the prosecution said in a statement.

Csatary, who has denied the charges, was first detained by Hungarian authorities in July 2012 after his case was made public by the Simon Wiesenthal Center, a Jewish organization active in hunting down Nazis who have yet to be brought to justice.

Budapest Investigative Prosecutors’ Office spokeswoman Bettina Bagoly told The Associated Press that since Csatary has been charged with war crimes, the case is considered to be of special importance and the first session of the trial must be held within three months.

Bagoly also said that the prosecution has asked the court to tighten the conditions of Csatary’s house arrest, which were loosened by a judge in April.

Csatary lived for decades in Canada and worked as an art dealer before leaving in 1997 just before he was due to appear at a deportation hearing. His Canadian citizenship was later revoked.

Bagoly said prosecutors had requested information in the case from Slovakia, Canada and Israel.

Holocaust survivor Edita Salamonova, whose family was killed in the Auschwitz death camp after their deportation from Kosice, said she remembered Csatary well.

“I can see him in front of me,” Salamonova told The Associated Press in an interview in Kosice last year. Salamonova remembered Csatary’s presence at the brick factory, which has since been torn down, and would make sure to keep out of his sight when he was around.

“One had to hide. You never knew what could have happened anytime,” said Salamonova, who was able to return home after enduring several Nazi camps.

Sandor Kepiro, another Hungarian suspect tried for war crimes after his whereabouts was disclosed by the Wiesenthal Center, died in September 2011, a few months after being acquitted due to insufficient evidence. The verdict was being appealed when he died.

Though Csatary is currently expected to go on trial in Hungary, it is also possible that he could be extradited to Slovakia, where he was convicted in absentia in 1948.

In January, a court in Kosice changed the sentence in that case from death to life in prison, since the death penalty is banned in the European Union. That could open the way for his extradition.

Marcela Galova, a spokeswoman for the regional court in Kosice, told the AP that a public hearing would be held July 19 to determine where Csatary would serve his life sentence.

Gabor Horvath B., who was appointed by the state to defend Csatary, told the AP that his client was in “satisfactory” health and that he expected the trial to go ahead in Hungary.

Lucia Kollarova, a spokeswoman for the Federation of Jewish Communities in Bratislava, the capital of Slovakia, said they wanted Csatary to go to prison in Slovakia.

“We would prefer the war criminal Laszlo Csatary to be extradited to Slovakia,” Kollarova said. “We don’t believe that given his age there is a realistic chance” he would be imprisoned in Hungary.

Efraim Zuroff, head of the Wiesenthal Center’s Jerusalem office, who brought Csatary to the attention of Hungarian officials, said he planned to attend the trial.

“We welcome the indictment and call upon authorities to expedite the trial in light of the defendant’s advanced age,” Zuroff said by telephone from Israel. “This is a very strong reminder of the importance of achieving justice even many years after the crimes were committed.”