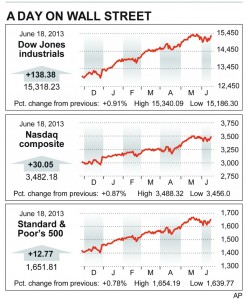 It’s all about the Fed. Still.

U.S. stocks moved higher Tuesday, helped by news of a pickup in home building and low inflation. But the Federal Reserve loomed large, with investors trying to guess what the central bank will say Wednesday about how long it plans to keep stimulus programs in place. For many, the market was in a holding pattern as investors waited for Wednesday’s announcement.

The market’s gains were steady and broad. The Standard & Poor’s 500 index rose 12.77 points, or 0.8 percent, to 1,651.81. All 10 of its sectors rose, led by industrial and telecommunications companies. The Russell 2000, an index of smaller companies, closed at a record high but fell just shy of the 1,000-point milestone.

Tuesday’s wait-and-see vibe came from a familiar template. The Fed has had an outsized effect on the stock market in recent weeks, with the major indexes getting yanked back and forth as investors try to guess how long the central bank will keep supporting the U.S. economy.

Some investors say it’s troubling that the market is relying more on the central bank for direction than economic fundamentals. The latest turning point was May 22, when Fed Chairman Ben Bernanke startled markets by announcing that the central bank could soon pull back on its bond-buying program if the economy improves.

The Fed’s role in the market has swelled since the 2008 financial crisis. The central bank, which is best known for helping set interest rates, has taken an increasingly bigger role in trying to amp up the economy. Its bond-buying program is meant to keep interest rates low, which can encourage borrowing and drive investors into the stock market. The Fed’s purchases have swollen its portfolio to $3.4 trillion, a four-fold increase since before the crisis.

Analysts predicted that Bernanke would use his Wednesday news conference to cast a reassuring tone and make it clear that the Fed won’t pull back on any of its programs until it’s sure the economy can handle it.

The Commerce Department reported that the pace of new home building increased in May, helped by more buyers coming to the market and a scarcity of houses for sale. Investors described the report as good enough to send the market up, but not good enough for the Fed to think the economy is healthy enough to abruptly slash its stimulus efforts.

The Labor Department reported that U.S. consumer prices rose last month, but only slightly. That’s also likely to influence the Fed’s decisions. The Fed knows that its stimulus programs can lead to inflation. If inflation is in check, however, that gives the Fed more leeway to continue the programs.

The yield on the 10-year Treasury note edged up to 2.19 percent from 2.18 percent late Monday.

—Hormel Foods, the maker of Skippy peanut butter, slipped after the company said it expects lower profits for the year. The stock fell $1.46, or 3.6 percent, to $39.19.

—Fast-food chain Jack in the Box rose after announcing it will close some of the Qdoba Mexican Grill restaurants that it owns. Jack in the Box gained $1.82, or 4.9 percent, to $38.81.

—Newfield Exploration was up after a Stifel Nicolaus analyst boosted the stock to “Buy” from “Hold.” Shares of the oil and natural gas company rose 93 cents, or 4 percent, to $23.94.

This article appeared in print on page 38 of the June 19th, 2013 edition of Hamodia.