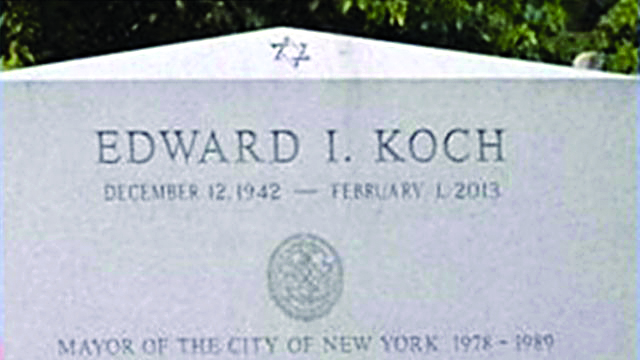 Famous for his ego, former New York City Mayor Ed Koch meticulously planned his own funeral, but his tombstone making him 18 years younger than his real age was a simple engraver’s mistake.

Tommy Flynn, an engraver, said Monday that the headstone listing Koch’s birth year as 1942 instead of 1924 was “an inadvertent error” and that he feels “terrible.” He said the date will be corrected within three weeks.

Koch, who was mayor from 1978 to 1989, was buried in a Washington Heights cemetery after dying in February at 88. Four years before he commissioned a tombstone to serve as a monument to his achievements but left out the dates of his birth and death.

Flynn said he worked with Koch for eight months designing the granite tombstone. It includes the last words of Daniel Pearl, the reporter for The Wall Street Journal who was beheaded in 2002 by Islamist terrorists in Pakistan: “My father is Jewish, my mother is Jewish, I am Jewish.”

Diane Coffey, Koch’s former chief of staff who joked about her boss’s meticulousness — “Who else plans every detail of a burial?” — said the mayor would have been amused by the blunder.

“He always used to talk about how he had a 29-year-old brain,” she said. “So now he practically bought two decades.”