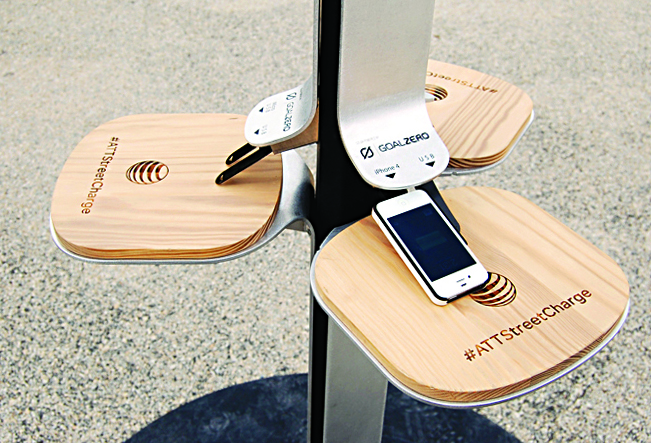 It’s a message busy New Yorkers hate to get: a low-battery message on your cellphone and no charger in sight.

Now that could be a thing of the past. Beginning Tuesday, the city has teamed up with AT&T to install 25 solar-powered charging stations for public use, available for free in parks and beaches across the five boroughs over the summer.

The “Street Charge” stations will be in place in New York until September, but if the pilot goes well they could become a permanent fixture.

The idea came about after Superstorm Sandy, said AT&T New York State President Marissa Shorenstein. Lack of power after the storm left New Yorkers desperately searching for somewhere to charge their phones to contact friends and loved ones. The blackout led people to walk for miles or line up to use daisy-chained power strips.

“After Sandy we met with the Mayor and asked what we could do to help,” she said. “This technology is designed for both good times and bad.

AT&T is paying for the stations, with no cost to the city.

Solar power manufacturer Goal Zero and Brooklyn design company Pensa partnered up to create the Street Charge stations. The seven-foot silver poles have three flat solar panel arms on top, with stands at waist-height to charge up to six devices at a time. The stations can also charge tablets and other mobile devices.

The solar technology uses monocrystalline power cells and can fully charge up to 30 phones before it needs some juice of its own.