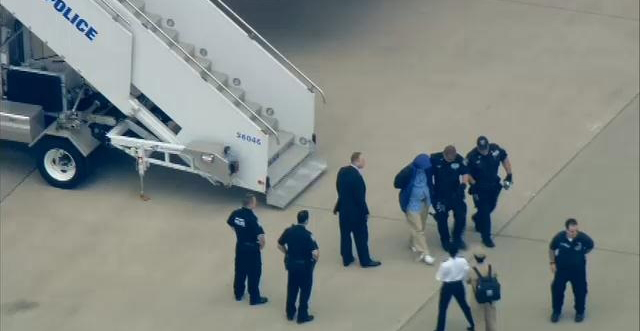 Passengers aboard a flight from Hong Kong jumped on a man who began ranting about national security and the CIA, then bound his hands and feet for the final six hours of the flight to the United States on Monday.

The man, described by passengers as an American, asked that United Airlines Flight 116 be diverted to Canada as he screamed about being afraid of the FBI and of being poisoned, passengers said.

“He was clearly not stable,” said passenger Jacques Roizen of New York, who helped wrestle the man to the cabin floor and sat in the same row as him after he was handcuffed.

Roizen said he, other passengers and a flight attendant jumped on the man and subdued him when he started reaching for his pockets hours before the plane landed at Liberty Airport in Newark. United said it followed its procedures for dealing with disruptive passengers and decided to continue the flight as scheduled.

While the plane was still in the air, the FBI said that the man had claimed everyone aboard was being poisoned, but the agency later said it was working to clarify just what the man said.

Passenger Peter Jones of Washington said he heard the man claim he himself was going to be poisoned.

The FBI said the man was hospitalized but did not provide further information about him. The passenger had called out what he said was his name, his birthdate and his Social Security number and claimed he worked for a U.S. embassy in the Middle East.

Jones and other passengers said they did not hear him threaten anyone else.

“He said someone was going to poison him,” Jones said.

While sitting in the same row as the subdued man, Roizen said he did his best to try to calm him.

“He was very paranoid,” he said.