Business EU, US to Launch Trade Talks Next Month
Business 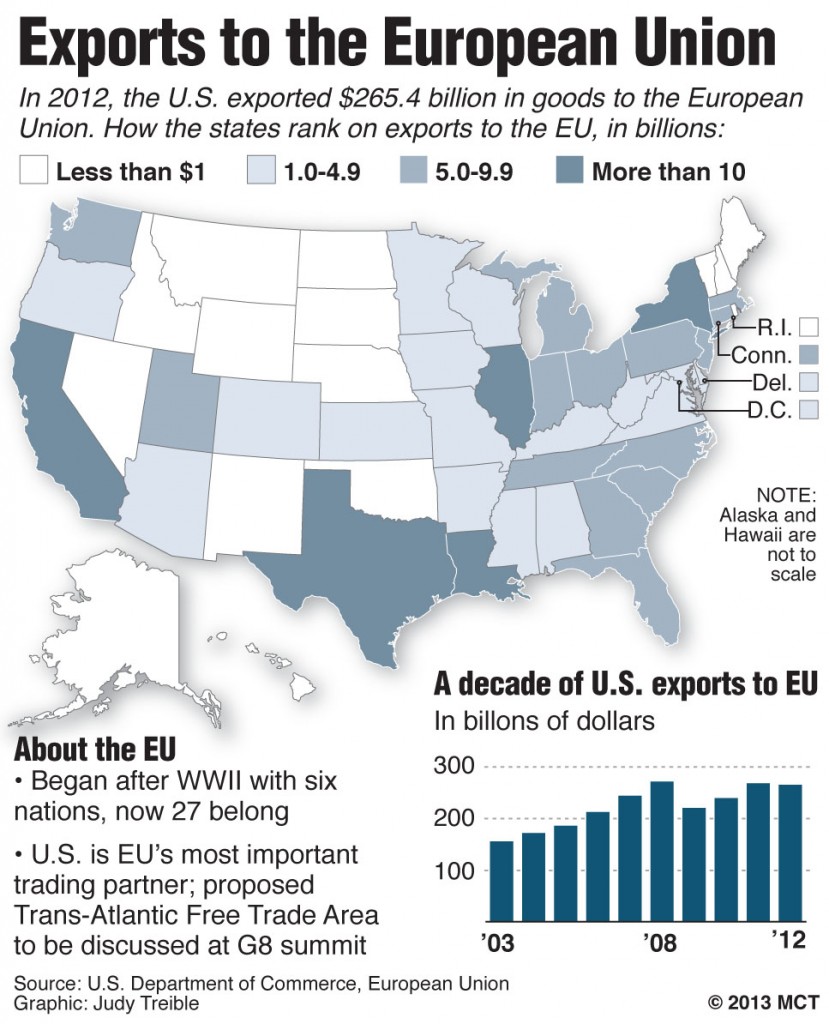 Talks on a sweeping trade deal between the European Union and the United States, the world’s two largest trading partners, are to get underway in Washington next month, President Barack Obama and top European Union officials said Monday.

“The EU-U.S. relationship is the biggest in the world,” Obama said after meeting with European leaders at the G-8 summit in Enniskillen, Northern Ireland, citing the roughly $1 trillion in trade of goods and services between the two every year.

“This potentially ground-breaking partnership would deepen those ties.”

The aim of the trans-Atlantic deal would be to promote economic growth by eliminating the import tariffs and changing regulations that keep goods made on one side of the Atlantic from being sold on the other.

When the start of negotiations were first announced by Obama in his State of the Union address in March, it was estimated that a deal could boost each economy by more than a half-percentage point annually and significantly lower the cost of goods and services for consumers.

Officials have said a deal could be reached next year. But securing one will be tricky. The talks will be watched warily by interest groups, and would have to be approved by each side’s lawmakers and leaders before the new trade arrangements take effect.

The EU has already yielded to pressure. When it was putting together its mandate for the negotiations last week, France managed to get state assistance of entertainment industries taken off the table. Barroso said the issue could be revisited later. Meanwhile, U.S. labor officials have also expressed skepticism.

The statement of support for the trade deal came just ahead of the opening of the Group of Eight Summit among the leaders of leading industrial nations: the U.S., Britain, Germany, France, Italy, Japan, Canada and Russia, plus the European Union.

Host Cameron greeted the arriving leaders against a backdrop of green grass and lake views at the Lough Erne golf resort near the small town of Enniskillen.

Later Monday over a working dinner, Russian President Vladimir Putin and Russia’s support for the Syrian government will be a topic for discussion.

Cameron said he wanted the summit to deliver a firm plan for promoting multi-faction talks in Geneva aimed at ending the country’s bloody civil war. Moscow officially shares that goal, but continues to ship military aid to the army of Syrian President Bashar Assad.

Following a frosty Putin-Cameron meeting Sunday in London, the Russian leader remains opposed to plans by the West to start shipping weapons to rebels struggling to topple Assad.

Obama announced Friday that the U.S. would start sending weaponry, while Britain and France remain concerned that the firepower might end up helping anti-democratic extremists linked to Iran and Lebanon’s Hezbollah militia.

“How can you allow Russia to continue to send weapons to the regime of Bashar al-Assad while the opposition gets so few weapons? ” asked French President Francois Hollande. “We will have this discussion … Not to point the finger at Vladimir Putin, but for him to understand that it is in the interest of world peace to have this conference in Geneva.”

The summit is taking place under heavy security, with some 7,000 police lining roads and checking vehicles.

A protest Monday attracted far fewer than the 2,000 expected by police. About 200 people gathered ahead of the march at a library in Enniskillen.