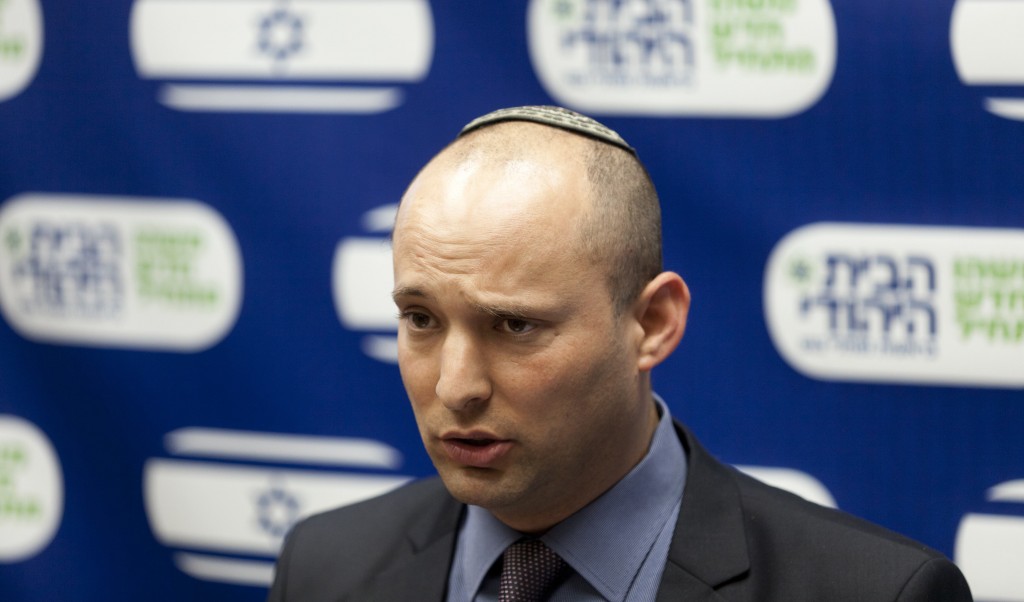 While Israeli Prime Minister Binyamin Netanyahu continues to affirm his government’s readiness to engage in non-conditional peace talks with the Palestinians anywhere and anytime, his senior coalition partner, economics minister and leader of the Jewish Home party Naftali Bennett, made it clear on Monday that Netanyahu faces a divided cabinet on the issue.

“The idea that a Palestinian state will arise inside the land of Israel has reached a dead end,” Bennett said Monday at a meeting of the Yesha council. “Never in the history of Israel have so many people dealt with so much energy with something so pointless,” he said.

Bennett said that the policy of Israeli land concessions and withdrawals has failed. “Terrorists entered everywhere that Israel withdrew from.”

Bennet’s comments come a week after Deputy Defense Minister Danny Danon (Likud), stated flatly, “There is certainly no majority” in Netanyahu’s own party for establishing a Palestinian state based on Israel’s borders before the 1967 Mideast war.

“A Palestinian state on the 1967 lines is something dangerous for Israel, and therefore I oppose that idea,” Danon told reporters.

Meanwhile, in a display of support for Netanyahu on Monday, Defense Minister Moshe Yaalon asserted that Bennet doesn’t represent the views of the government vis-à-vis the Palestinians. Yaalon was dismissive of Danon, referring to him as “the man they call the deputy defense minister.”

The pronouncements from right-wing officials have been heard outside Israel’s borders.

The Palestinians’ chief negotiator, Saeb Erekat, condemned Benett’s remarks. “These are not isolated events but a reaffirmation of political platforms and radical beliefs. Israel has officially declared the death of the two-state solution,” he said.

Bennett’s comments also provoked negative reaction from members of the opposition and other coalition partners.

Kadima head Shaul Mofaz slammed Bennett’s statement as an “irresponsible comment that delegitimizes Israel in the eyes of the world.” Mofaz also went after Netanyahu, asserting that Bennett’s comments indicate that the prime minister “proves that he says one thing and does another. This is why there is no trust between the [party] leaders.”

Meanwhile, Deputy Foreign Minister Ze’ev Elkin (Likud), who also addressed the conference, warned that one should not assume that the idea of a Palestinian state is dead, and that Israel must continue to resist such an outcome.

But the Netanyahu government is in need of more than public relations. The ideological split within the government again calls its viability into question.

Science, Technology and Space Minister Yaakov Perry (Yesh Atid) told Army Radio that he believes the two-state solution is the only solution that could prevent a bi-national state, and said that he didn’t think the cooperation between Yesh Atid and Jewish Home could last in light of Bennett’s statements.