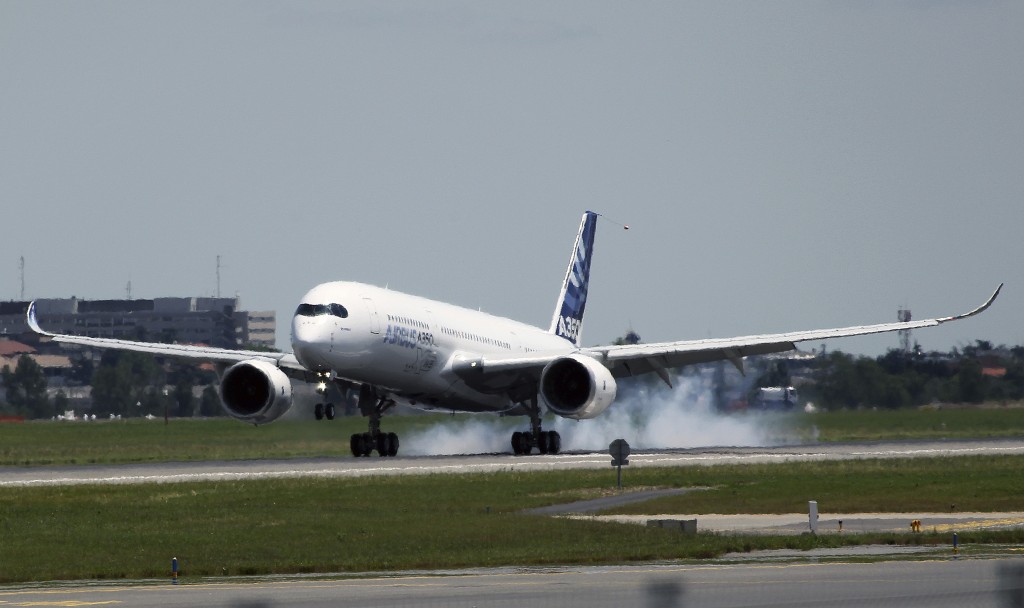 The A350 XWB took off from Toulouse-Blagnac Airport in southwestern France about 10 a.m. local time, the company said. There were thousands of spectators to watch the massive jet take to the skies.

The flight lasted four hours and five minutes. The aircraft was flown by Peter Chandler, Airbus’s chief test pilot, with five others onboard. During the flight, the crew pushed the A350 XWB’s flight envelope.

The aircraft was accompanied by a chase plane, and its progress was monitored on the ground in real-time via direct telemetry.

“I congratulate the whole A350 XWB development team for having completed the first flight preparation in a record time,” Airbus President and chief executive Fabrice Bregier said. “I also wish to thank the first flight crew today for taking this aircraft where it wants to be – in the sky.”

Lengthy delays have plagued the new plane, which is made largely with lightweight carbon fiber. But Airbus said the A350 XWB has already won 613 firm orders from 33 customers worldwide, with the plane expected to start service in the second half of 2014. 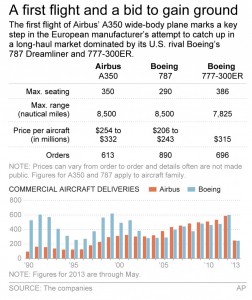 Airbus executives want the new jet to make a big splash at the Paris Air Show, which begins Monday and runs through June 23.

The event is typically an occasion for airlines and aircraft leasing companies to go on buying sprees, announcing orders worth billions of dollars.

The A350 XWB is a direct competitor to rival Boeing Co.’s beleaguered 787 Dreamliner in the long-haul market.

Airbus is looking to cash in after Boeing’s misfortune with its 787. That plane was returned to service in May after being grounded for three months in connection with two incidents in less than two weeks in which the plane’s lithium-ion batteries overheated.

Since then, investigators have examined the 787’s battery design and certification process, but the root cause remains a mystery.

Airbus had planned to use lithium-ion batteries on the A350 XWB to save weight and therefore fuel. But the company switched to more traditional nickel cadmium batteries for the new jet when Boeing’s problems began making headlines.