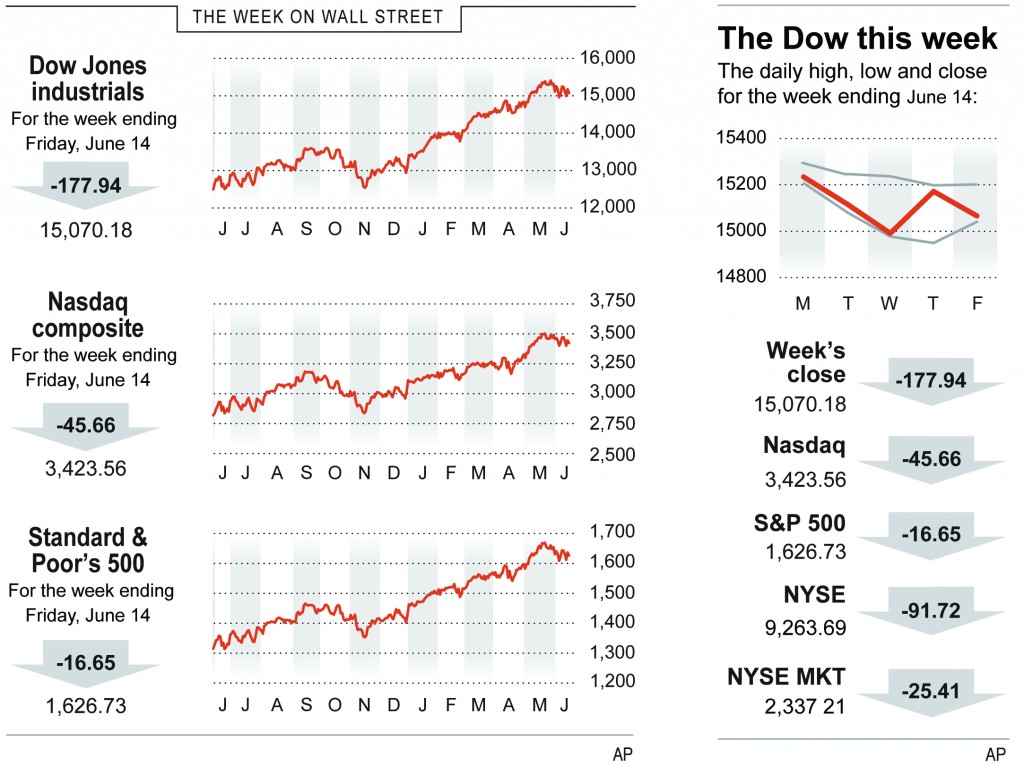 Concerns that the Federal Reserve could announce plans to cut back its stimulus program next week also weighed on the mood.

Americans’ confidence in the economy weakened in June and was lower than economists had estimated, according to the Thomson Reuters/University of Michigan survey out Friday. Another report said factories weren’t as busy as expected.

Market indexes flitted from slight gains to losses in morning trading, a contrast to the sudden lurches in previous days. All three major indexes lost 1 percent or more this week.

Trading has been volatile since late May as traders try to figure out when the Fed will dial back its aggressive support for the U.S. economy. This week was no different: The Dow slumped a total of 243 points on Tuesday and Wednesday then jumped 180 points Thursday. The blue-chip average has made moves of 100 points or more in seven of the last 10 trading days.

The Fed buys $85 billion in bonds every month as part of a campaign to keep interest rates extremely low. The aim is to encourage borrowing, spending and investing. Some investors worry that long-term interest rates could spike when the Fed pulls back, raising borrowing costs and threatening the economic recovery. Higher yields for government bonds have already started pushing mortgage rates up.

Policymakers at the Fed will start a two-day meeting Tuesday to discuss the central bank’s next steps. After the meeting wraps up, the bank will release its policy statement and Fed Chairman Ben Bernanke will hold another press conference.

Banks led nine of the 10 industry groups in the S&P 500 lower. Utilities made slight gains. Investors tend to favor these safety plays when they want stable companies that pay steady dividends.

The S&P 500 hit a record high of 1,669 on May 21. The next day, Fed officials said they would consider pulling back on their stimulus program once the economy looks healthy enough. The S&P 500 has lost 2 percent since.

The price of oil rose $1.16 to close at $97.85 a barrel, near its highest level of the year, as traders reacted to news that the U.S. would provide weapons to rebel forces in Syria.

In the market for U.S. government bonds, the yield on the benchmark 10-year Treasury note dipped to 2.13 percent from 2.15 percent late Thursday. The yield reached a 14-month high of 2.29 percent on Tuesday. Expectations that the Fed will pare its bond buying have helped drive the yield up from 1.63 percent on May 3, when it was at its lowest level this year.