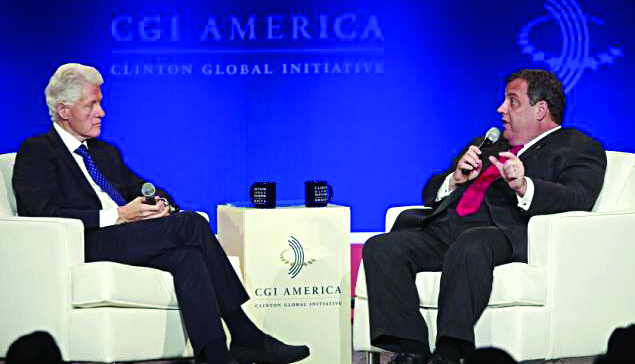 Republican Gov. Chris Christie of New Jersey is walking a political tightrope as he charts his future, trying to balance his re-election campaign in a Democratic-leaning state with a potential presidential bid aimed at winning over Republicans.

“He can’t spend 10 minutes just to make an appearance?” asked Ginger Howard, a conservative radio show host in Atlanta. “People who neglect us are sorry.”

Seven hundred miles away, Clinton and Christie praised each other during a friendly 40-minute conversation at the Clinton Global Initiative America.

The former president turned to the audience at one point and said of Christie, “I want all of you to know how much work he’s done on this.

“The enduring image that most Americans have of you is standing there in your jacket, grieving with your people, working with them and working with your president,” Clinton told the Republican governor. “And you got both praise and [criticism] for ignoring the political differences that you had then, and still have, with the president and all of us in the other party to do something that was really important.”

Christie has taken a number of steps in recent weeks to highlight his centrist approach. He picked up endorsements from Democrats and appeared with President Barack Obama along the Jersey Shore last month to tout the recovery from Sandy.

Reed’s Faith and Freedom Coalition in many cases rejected calls for a moderate approach to explosive social issues, which Christie avoided completely by not showing up.

“Chris Christie is dangerously close to sending conservative Republicans a clear message that he doesn’t care about their thoughts or views,” said GOP operative Michael Dennehy. “Spending time with Barack Obama is one thing, but when he goes out of his way to spend time with Bill Clinton, it begins looking like a pattern of behavior that will alienate Republican voters — and conservatives in particular.”