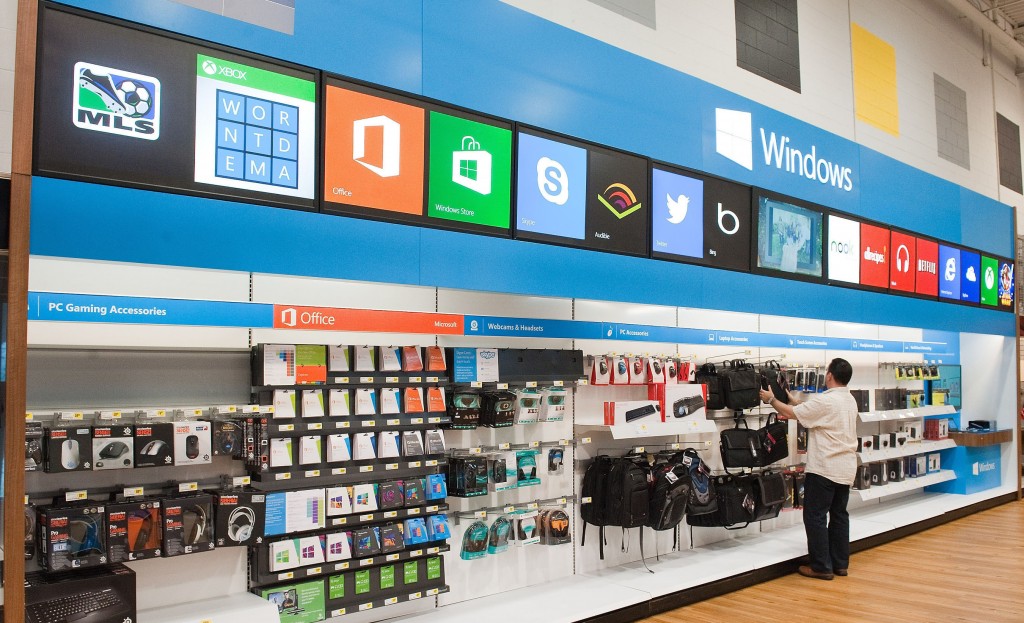 The sections will begin opening this month, and offer Windows-based PCs, tablets, Xbox’s and accessories, as well as trained staff to explain Windows 8 to customers.

All of the Microsoft mini-stores are expected to be set up in about 600 Best Buy locations in the U.S. and Canada by early September, around the same time analysts expect a free update to Windows 8 to be released.

The update, called Windows 8.1, is meant to reduce some of the confusion caused by a dramatic overhaul of the operating system that debuted amid much fanfare last October, only to get off to a tepid sales start.

The alliance with Microsoft comes as Minneapolis-based Best Buy continues to battle the “showrooming” effect, the term for shoppers who browse in stores and then buy items cheaper online. This has led to fears that the big-box store format is growing obsolete.

But major electronics retailers are finding advantages to having a destination where trained sales staff can explain its products to shoppers. Best Buy Co. Inc. has similar stores-within-stores for Apple, Samsung and Magnolia products.

But none of the previous mini-stores have been as ambitious as the Microsoft format, said Jason Bonfig, Best Buy’s vice president of merchant computing. The Microsoft stores will span an average of 1,900 square feet, nearly five times larger than Best Buy’s most recent alliance with Samsung, Bonfig said in a Thursday interview.

“The fact is Best Buy has prime floor space up for grabs, and tech companies want their best offerings in there (along with the customer service), instead of buried on Amazon,” he said in a note to clients.

Bonfig declined to comment when asked if Best Buy is planning to set aside more space for mini-stores.

Microsoft is counting on its stores within Best Buy stores to give it more opportunities to provide hands-on demonstrations with Windows-powered devices.

The expanded access to prospective buyers of personal computers and tablets is important to Microsoft because the Redmond, Wash. software maker believes the advantages of Windows 8 become more apparent with a little guidance.

Among other changes from the operating system’s old setup, Windows 8 displays applications in a mosaic of interactive tiles. The new look is a complete break with more than two decades of Windows history, and offers few signals about where to tap and click to perform basic functions. More than 1,200 Microsoft-trained workers will staff the Best Buy kiosks to answer questions about the devices.

“You have to see and feel and touch these devices,” Tami Reller, Windows’ chief marketing and financial officer, said in an interview. “I feel like we have learned a lot in the last six months to make this experience perfect.”

The move is a “vital strategic step forward” in Microsoft’s retail strategy, but probably should have been done several years ago, wrote Forrester analyst J.P. Gownder in an online post. He said it isn’t as ambitious a move as it could have been if Microsoft had opened more of its own stores, for example, but he acknowledged that that would have been more expensive.

Microsoft operates more than 70 of its own retail stores in the U.S., Canada and Puerto Rico.