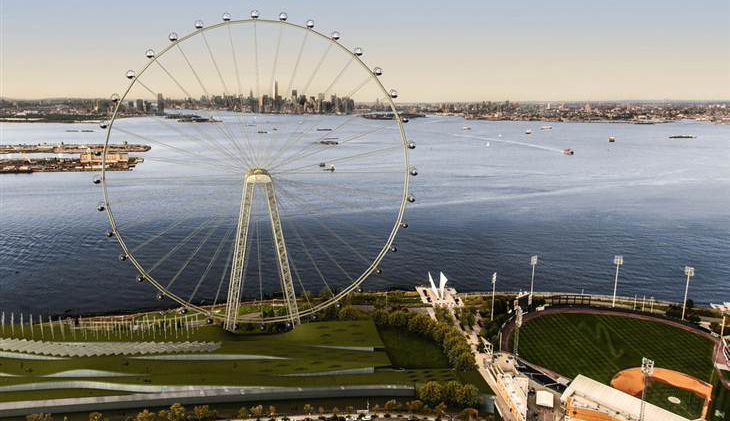 The Big Apple is getting another “biggest”: The world’s biggest Ferris wheel is to be built on Staten Island, in an ambitious attempt to draw tourists to what’s sometimes known as the city’s “forgotten borough,” officials announced Tuesday.

A New York City community board has given its blessing to what’s billed as the world’s largest Ferris wheel.

The $230 million attraction, to be called the New York Wheel, is to grace a spot overlooking the Statue of Liberty, New York Harbor and the downtown Manhattan skyline — a singular view that officials hope will add to the appeal of what they say would be the world’s tallest Ferris wheel. The 625-foot-tall structure would swing higher than the Singapore Flyer, the London Eye and a “High Roller” wheel planned in Las Vegas.

Construction is expected to begin in early 2014 on the privately financed project, which also includes a 100-shop outlet mall and a 200-room hotel. The grand opening could come by the end of 2015.

While riding the Staten Island Ferry is a staple of many visitors’ agendas, the city has long sought to entice tourists off the boat and into Staten Island, the least populous and most remote borough — one once known for hosting the world’s largest landfill.

Australian tourists Leah Field and Adam Lica, for example, were riding the ferry Thursday for its views of the Statue of Liberty. They thought they might have lunch on the Staten Island side but weren’t planning to explore further.

“We weren’t sure what there is to do there,” explained Lica, 32, of Melbourne.

Were there a giant Ferris wheel, would the couple stay to ride it? Probably, he said.

Staten Island has its attractions, including a minor league ballpark and the zoo that hosts Staten Island Chuck, New York’s answer to the famous prognosticating groundhog of Punxsutawney, PA. Chuck bears the dubious distinction of having once bitten Bloomberg.

But Staten Island, the only one of the city’s five boroughs not accessible by subway, tends to get overshadowed by its municipal neighbors, so much so that some have at times suggested it secede from the city.

The project is expected to bring $500 million in private investment to the borough’s St. George waterfront, and the developers will pay the city $2.5 million a year in rent for the land.