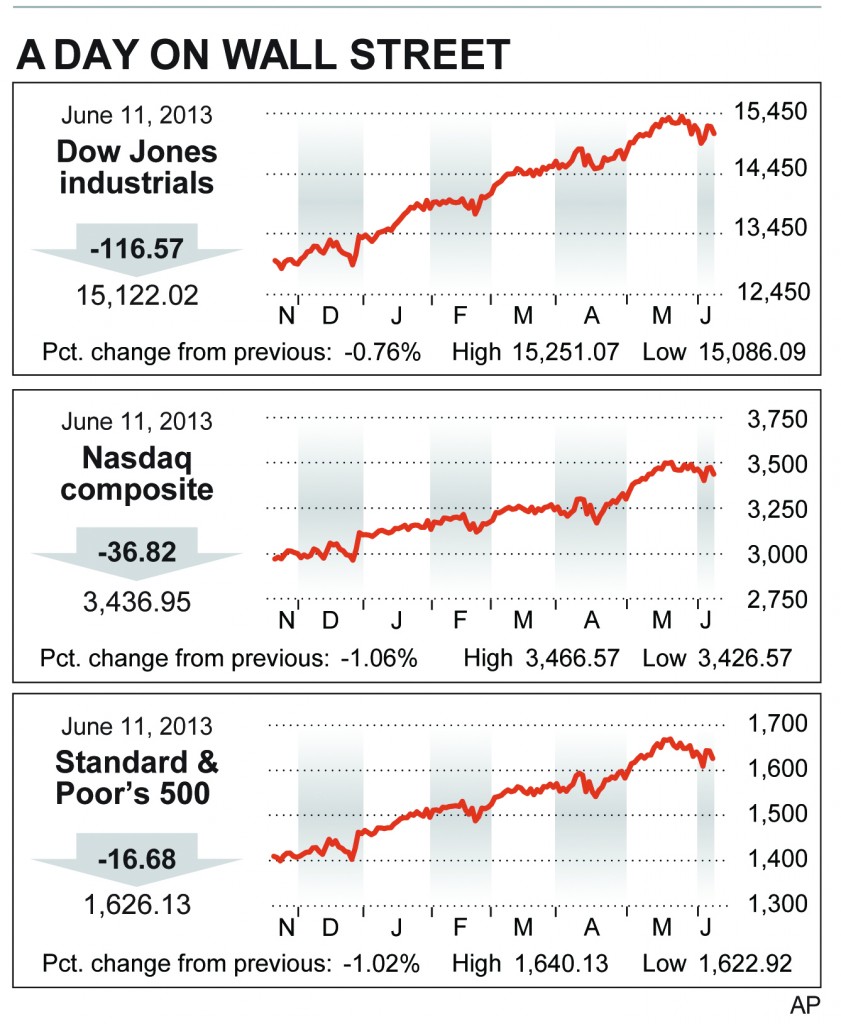 Renewed concerns that central banks will ease off their support for the global economy hit the U.S. stock market Tuesday, wiping out its gain for the month.

It looked bad from the start. Indexes began sliding from the opening bell, trailing markets in Asia and Europe, which were rattled when the Bank of Japan decided not to take any new steps to spur growth in the world’s third-largest economy.

The Dow Jones industrial average dropped 116.57 points to 15,122.02. That’s a decline of 0.8 percent. It fell as much as 152 points in the first hour of trading, climbed back by midday and then sank in the afternoon.

The S&P 500 index has lost 2.6 percent since setting a record high on May 21. The next day, minutes from a Fed meeting suggested the central bank could decide to scale back its stimulus as early as June if the economy picks up.

Sprint Nextel gained 17 cents, or 2.4 percent, to $7.35 after Japan’s Softbank raised its offer for the company. Softbank’s total bid for the country’s third-largest phone carrier is now valued at $21.6 billion, still short of the $25.5 billion offered by Dish Network.

Overseas, the Bank of Japan voted on Tuesday to stick to its current bond-buying program, disappointing those who had expected the bank to widen its effort. Japan’s Nikkei stock index lost 1.5 percent.

The world’s biggest central banks have bought trillions of dollars worth of bonds in recent years, pressing long-term interest rates down in an attempt to encourage borrowing and spending. In the U.S., the Fed buys $85 billion in bonds each month.

With plenty of signs the U.S. economy is improving, many on Wall Street expect the Fed will start cutting back this summer. That’s one reason traders have been selling bonds, pushing the yield on the 10-year note from a low of 1.63 percent last month to 2.18 percent on Tuesday.

In government bond trading, the yield on the 10-year Treasury note touched a 14-month high of 2.29 percent before heading back down to 2.18 percent in late trading, according to Tradeweb. That’s down slightly from 2.21 percent late Monday.

The dollar fell sharply against the Japanese yen, sliding to 96.22 yen from 98.70 yen late Monday.