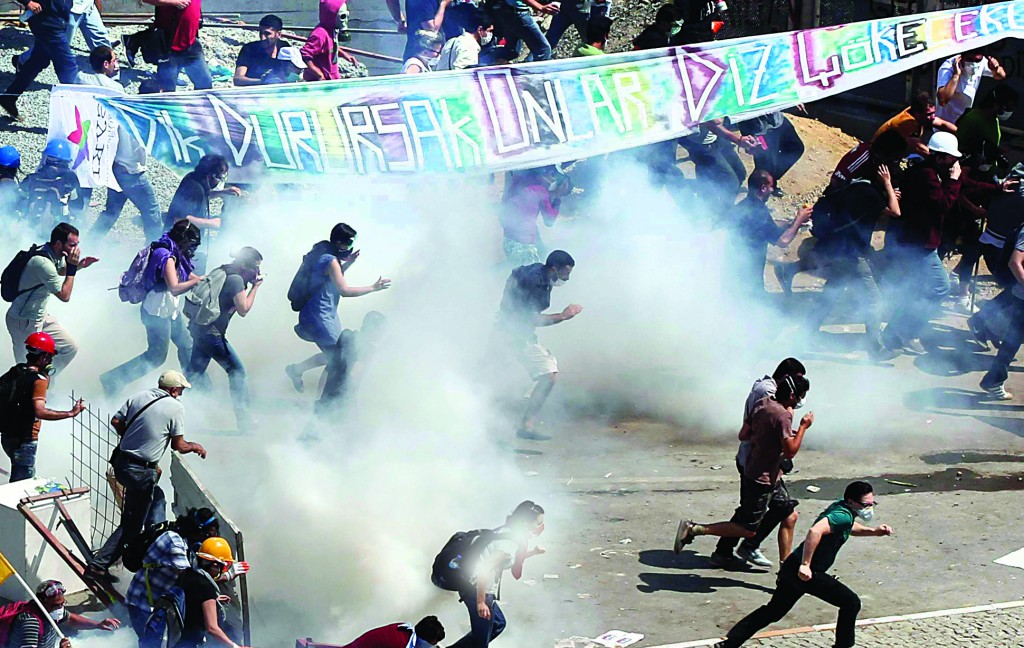 The governor of Istanbul declared that police operations would continue day and night until the square, focus of demonstrations against Erdogan, was cleared.

Police fired volleys of tear gas canisters into a crowd of thousands — people in office clothes as well as youths in masks who had fought skirmishes throughout the day — scattering them into side streets and nearby hotels. Water cannons swept across the square targeting stone-throwers in masks.

The protesters, who accuse Erdogan of overreaching his authority after 10 years in power and three election victories, thronged the steep narrow lanes that lead down to the Bosphorus waterway. Gradually, many began drifting back into the square as police withdrew, and gathered around a bonfire of rubbish.

Erdogan had earlier called on protesters to stay out of Taksim, the center of demonstrations triggered by a heavy-handed police crackdown on a rally against development of the small Gezi Park abutting the square.

Gezi Park has been turned into a ramshackle settlement of tents by leftists, environmentalists, liberals, students and professionals who see the development plan as symptomatic of overbearing government.

The protests, during which demonstrators used fireworks and petrol bombs, have posed a stark challenge to Erdogan’s authority and divided the country. In an indication of the impact of the protests on investor confidence, the central bank said it would intervene if needed to support the Turkish lira.

Erdogan, who denies accusations of authoritarian behavior, declared he would not yield.

“They say the prime minister is rough. So what was going to happen here? Were we going to kneel down in front of these (people)?” Erdogan said as action to clear the square began.

“If you call this roughness, I’m sorry, but this Tayyip Erdogan won’t change,” he told a meeting of his AK party’s parliamentary group.

Western allies have expressed concern about the troubles in an important NATO ally bordering Syria, Iraq and Iran. Washington has in the past held up Erdogan’s Turkey as an example of an Islamic democracy that could be emulated elsewhere in the Middle East.

Victor in three consecutive elections, Erdogan says the protests are engineered by vandals, terrorist elements and unnamed foreign forces. His critics, who say conservative religious elements have won out over centrists in the AK party, accuse him of inflaming the crisis with unyielding talk.