Obama’s Imprimatur on the War on Terror 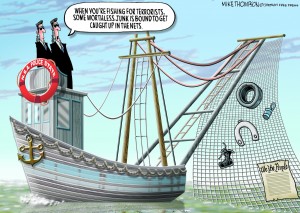 “Yossel! You  heard what happened by the Kosel the other day.

“Must’ve been the wind.”

As of last week, we now know that it wasn’t the wind spying on the pair’s probably fascinating and informative conversation, it was Big Brother in Washington.

Not! Nobody spied on you.

The government’s PRISM and phone records program only keeps a record of who you called, not what was said. A separate warrant by a special federal judge is required to actually hear you call the Weather Channel to hear the five-day forecast for rain in Brooklyn, N.Y.

The revelation that Big Brother’s been spying on us fills me with a sense of satisfaction. While in an ideal world governments would fight warriors, not tactics, there is no such animal today. We fight a war on terror, not on Islamists. We make Grandma remove her shoes at airports while a terrorist may get through without even having to remove those wires from his pocket.

So the fact that President Obama is not only continuing President George W. Bush’s anti-terror tactics, but even expanding upon them and defending them to a liberal, skeptical media, shows that these things will go on well into the future.

When FDR established Social Security, Republicans called it socialism and discrimination. It was only 20 years later when President Dwight Eisenhower took office and worked to shore it up that it became permanent.

Ditto for Democrat President Johnson’s war on poverty, with food stamps, Medicaid and WIC making their debut. It became mainstream only after his Republican successor, Richard Nixon, embraced it as a legitimate program.

Reagan’s revolution was set in stone by Bill Clinton’s call for the end of the welfare state, and Bush’s war on terror is now a bipartisan affair with last week’s NSA revelation.

We live in a time where a creeping liberalism is infecting every branch of government. Obama’s “I have a drone” speech two weeks ago, defending the taking out of terrorists overseas, is greeted with scorn by elites worried over the fact that there was no trial and Muhammad was not Mirandized.

In New York City, Mayor Michael Bloomberg is a strong backer of the stop- and-frisk program and of profiling Muslim communities. Both tactics emphasize going where the criminals are, rather than where we want them to be.

But Bloomberg is about to leave office, and his likely successor is not nearly as worried as he is about keeping the tactics in place that kept New Yorkers safe.

The reason I am concerned is that while Bush, a plainspoken Texan with no compunctions about wearing his emotions on his sleeve could be trusted to say that my phone conversations with my mother are NOT recorded, Obama has lost all credibility on this.

The fact that the IRS was targeting conservative groups on order from DC has already been established. What if Obama doesn’t like my ideology and orders the NSA — far more secretive and invasive than the IRS — to target me?

(Worse, what if I’m targeted for a drone attack?)

While I have been a strong critic on Obama’s methods in waging the War on Terror — chief among them was that he hasn’t been waging it — I must credit him for committing to programs that prove their value.

At least one terror attack in New York was averted because of this program, and no, I have yet to be contacted by Big Brother for my outrageously funny email thread I had with my friend the other night.

But as long as Obama promises to limit his spying on what he says he is — searching for the late-night calls to Pakistan or Saudi Arabia — I will support it.

This article appeared in print on page 44 of the June 12th, 2013 edition of Hamodia.