INTERVIEW: “We Must Increase Torah, Tefillah and Merits” 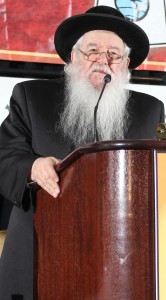 The Novominsker Rebbe, Harav Yaakov Perlow, shlita, speaks to Hamodia about the difficult situation in Eretz Yisrael and the frightening plans of the anti-religious government. The Rebbe reiterated that chareidi American Jewry will continue to support Torah institutions in Eretz Yisrael as it has done until today.

Chareidi Jewry in America has begun to express deep concerns in light of the dangers of the serious decrees being enacted by the anti-religious government in Eretz Yisrael. These plans will have a dire effect on the Torah world, and the biggest danger is the threat of a mandatory draft for yeshivah bachurim.

Hamodia spoke to the Novominsker Rebbe, shlita, the Rosh Agudas Yisrael in America and a member of the Moetzes Gedolei HaTorah of America, regarding the situation.

We have heard that chareidi Jewry is closely following the news of the draft law hovering over those who learn Torah in Eretz Yisrael, and the other plans of this government, such as forcibly imposing curriculum elements in chareidi schools, and various financial decrees that will make life very difficult for the chareidi community.

“These are terrible decrees, the likes of which we have not heard of before. We must increase our tefillos and merits in order to be spared from them. We must cry out and arouse Heavenly Mercy so that Hashem should remove these threats that the government is planning. These decrees decided on by the Israeli government, under the guise of “sharing the burden,” are not because they want yeshivah students to enlist and serve in the army. They want to get into the thick of the Jewish, Torah-observant lifestyle and alter it, R”l. They want to uproot Torah chinuch that has been handed down to us generation after generation, and they want to do this by implementing various programs. They also want to interfere in other areas of Torah-observant life. This is something that has not been heard of since the establishment of the chareidi Jewish yishuv.”

Does the Rebbe remember previous difficult situations such as this, when chareidi Jewry had to face such serious threats and an almost certain financial collapse?

“Throughout the years, those who violate Torah and mitzvos have been jealous of chareidi Jews. But in previous years, it was as though they were worried that chareidi Jewry was forcing them to observe Torah and mitzvos. They wanted to desecrate Shabbos and lead their lives like any gentile does, but they perceived the Torah-observant chareidim as obstructing their path with “religious coercion.” That is why they constantly sought to dog the steps of Torah-true Judaism. But when it comes to a point where they try to interfere and manage the lifestyle of the Torah-observant Jews—that is something we have not yet witnessed. And that is what they are trying to do today. They want to instruct frum Jews on how to educate our children and how to learn and teach Torah. And this is what we have to be so aware of today, and we must daven fervently for Heavenly Mercy that these decrees be annulled.”

Chareidi Jewry in the United States has supported the Torah institutions in Eretz Yisrael. Even before the chareidi yishuv in Eretz Yisrael was established, American Jews supported and encouraged the building of yeshivos and Torah institutions. The Birchas Shmuel, Harav Baruch Ber Leibowitz, zt”l, traveled on the well known sojourn for two years to the United States to solicit support for his yeshivah in Kamenitz. The same is true for Harav Elchanan Wasserman, zt”l, who came from Baranowitz to America to raise funds for his yeshivah. The support that comes from American Jewry today is many times as much as then. What do they have to say in light of the situation and the potential financial collapse that can be triggered by the government’s plans against the Torah world and yeshivos?

“Of course chareidi Jewry in America will support the Torah world, the yeshivos and the kollelim in Eretz Yisrael, as it has done until now. But even until now, despite the fact that the government allocated funds to the Torah institutions, the Rosh Yeshivah and kollelim always traveled abroad to raise funds to make up the difference. Who can even conceive now that they will have to raise additional huge amounts of money? It’s very hard to imagine. The sums amount to millions of dollars and who knows if they will be able to meet the demands? Many do not understand the urgency of the matter, that it is not only drafting bachurim or urging them to go out to work, the way the government is presenting it. It is the uprooting of the Torah world. And of course, we will make every effort, but we need great Heavenly Mercy.”

And the main thing, the Rebbe concludes, is that “our power is in our mouths. We must daven and plead to our Creator to annul these decrees and remove this evil government. By increasing our Torah learning, and sticking firmly to our principles, the anti-religious government will see that the chareidi community in Eretz Yisrael will not compromise, and that every effort to control their lives will not succeed.”

This article appeared in print on page 7 of the June 12th, 2013 edition of Hamodia.