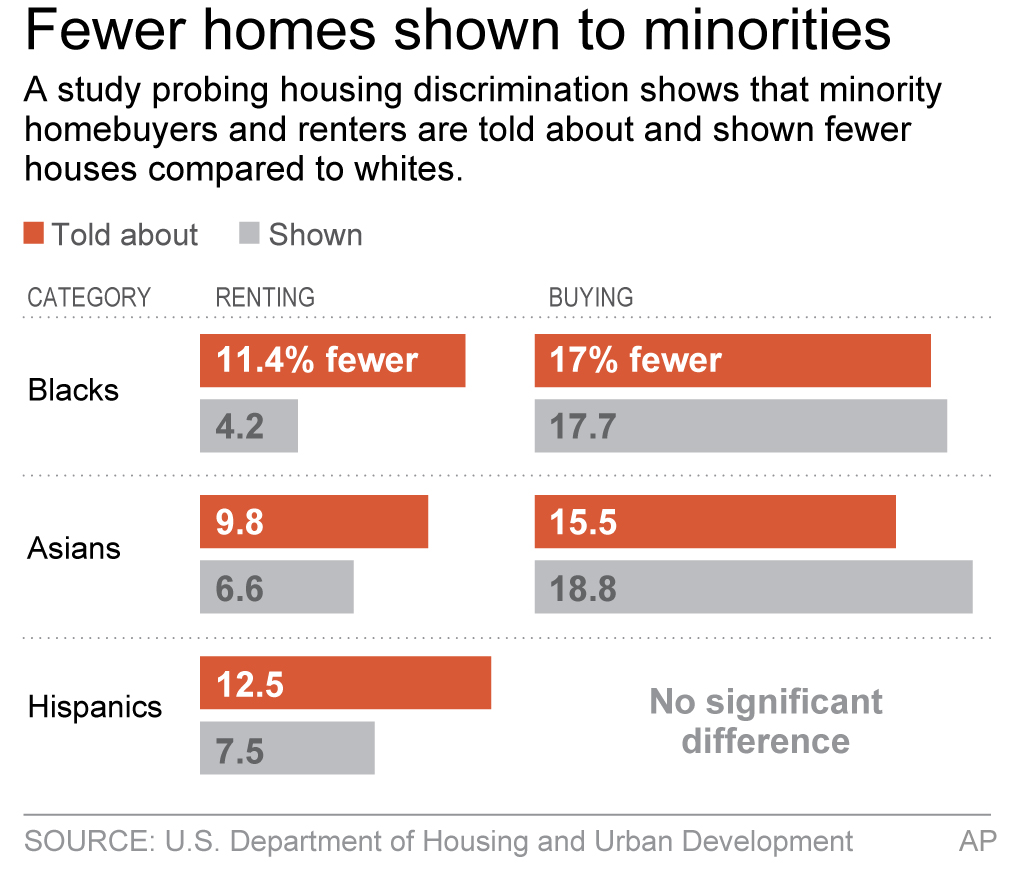 Minority renters and homebuyers deployed to test for housing discrimination did not run into the blatant discrimination of four decades ago, but were told about and shown fewer homes than their white counterparts with similar backgrounds, according to the results of a major federal housing study released Tuesday.

The Department of Housing and Urban Development deployed pairs of testers — one white and one minority in each pair — to do more than 8,000 tests separately across 28 metropolitan areas, in the $9 million study the Obama administration conducted last year.

In the study, whose results were released Tuesday, testers were the same gender and age and presented themselves as equally qualified to rent or buy a unit.

The blatant discrimination of literally slamming doors in the face of minorities that was found in a similar 1977 HUD study was less evident: minorities usually were able to get appointments and see at least one unit last year. However, blacks and Asian Americans were treated differently than white counterparts, and often given fewer options.

Hispanics were also treated differently when renting, but experienced about equal treatment as whites when seeking to buy a home.

“It’s fundamentally unfair somebody would get information about fewer homes and apartments just because of the color of their skin. But it also really raises the cost of housing search for minorities and it restricts the housing choices available to them,” Turner said.

Donovan added that the discrimination affects minorities’ ability to move to a community with a good school, denying their children the best education; and to move to safer neighborhoods or relocate to an area with job openings, thus affecting financial security.

“I stress that the findings of this study are more than just numbers. They represent families being denied their fair shot of the American dream,” Donovan said.

Turner said paired testing can’t capture all the forms of discrimination that might occur. Also, because testers presented themselves as unambiguously well-qualified for the apartments, the results don’t reflect the average minority home-seeker. The study’s findings probably understate the level of discrimination occurring, she said.

Study authors said enforcement of housing discrimination laws cannot rely heavily on victims’ individual complaints, because the type of discrimination seen in the study is virtually impossible for a victim to detect.

The study’s findings include:

The country has a long legacy of pushing minorities into certain neighborhoods and denying them access to those reserved largely for whites, thus creating racially segregated communities, many of which continue today. A string of tactics have been used, from writing covenants that restrict the renting or sale of property to people of a certain race or ethnicity, to financial institutions refusing to provide loans to minorities.

“We should not be under any illusion the job is done. The message clearly should not be, ‘It is time to relent on fair housing activities,’ ” Donovan said.