Hagaon Harav Yehoshua Neuwirth, zt”l, a close talmid of Hagaon Harav Shlomo Zalman Auerbach, zt”l, an eminent posek and the author of Shemiras Shabbos Kehilchasah, passed away in Yerushalayim on Tuesday morning at the age of 85.

In addition to his masterpiece sefer, Harav Neuwirth served as Rosh Yeshivah in three yeshivos Chachmas Shlomo, Nesivos Chachmah and Pnei Shmuel, shouldering the burden of both the spiritual and physical welfare of the talmidim.

Harav Shlomo Zalman Auerbach, zt”l, greatly admired Harav Neuwirth, and once told some of his talmidim that “it was worthwhile to establish Yeshivas Kol Torah for a talmid like Rav Neuwirth.”

Harav Neuwirth was born in Berlin. His father, Reb Aharon, served as Rav in several kehillos in Germany. After Kristallnacht, his parents sent him and his brother on the Kindertransport to Belgium. His parents and sister later escaped from Germany to Holland in 1939 and brought Reb Yehoshua and his brother over from Belgium to Amsterdam; the family spent the war years together. 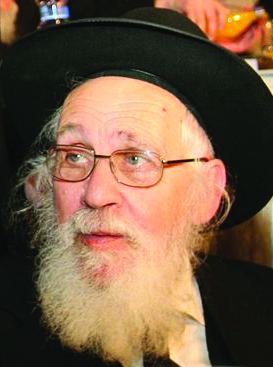 When the Nazis captured Holland in 1940, life became very difficult for the Jews. The Neuwirths were able to survive with forged ration cards they received from the Underground. Furthermore, the Underground paid Harav Aharon Neuwirth a salary to serve as their rabbi.

In Iyar 1943, the Germans decided to liquidate Amsterdam’s Jewish community. The Neuwirth family sat at home, frozen in fear, waiting for the inevitable knock at the door. Armed with official lists, the Germans reached their building. But instead of knocking at the doors, they just stood at the entrance of the courtyard and called “Are there Jews here?” Then, one of the gentile neighbors of whom the family was very afraid, came over and told the Germans, “We don’t know of any Jews here!”

Each year, Harav Neuwirth celebrated that day as a personal Purim together with his extended family.

For two and a half years they lived in a bunker with nothing but two sefarim, a Gemara Kesubos and a Mishnah Berurah chelek gimmel, and so, they were able to learn only hilchos Shabbos. They received food from the Underground until Holland was finally liberated from Nazi rule in 1945.

In the spring of 1946, Reb Yehoshua joined a group of illegal immigrants traveling to Eretz Yisrael. They were ordered to board the ship in Marseilles, France, on Shabbos, which distressed him to no end. On the other hand, it would have been dangerous to remain alone in a strange place with no money, food or belongings. He boarded the ship, but felt remorseful about it for many years, especially when he learned that the whole boarding on Shabbos was a setup by Shabbos desecrators who wanted the religious group to desecrate Shabbos.

As he boarded the ship that Shabbos, Reb Yehoshua pledged that when he would settle down, he would do something for Shabbos. This pledge was the seed that germinated into the sefer Shemiras Shabbos Kehilchasah.

After spending several months in the Atlit transit camp, Rav Neuwirth came to Yerushalayim and began learning in Yeshivas Kol Torah, where he was taken under the wing of the Roshei Yeshivah, zt”l, and the Mashgiach, Harav Gedaliah Eisenman, shlita. When Harav Shlomo Zalman Auerbach became Rosh Yeshivah after the passing of Harav Yechiel Michel Schlesinger, zt”l, Reb Yehoshua became very close to him. That relationship grew stronger with time.

After his oldest son was born, Reb Yehoshua began to pay attention to the fact that there was no comprehensive sefer that compiled all the halachos of Shabbos in a clear and easy-to-read fashion and answered questions that arise every Shabbos. He began to learn b’chavrusa with Dr. Alexander Goldschmidt and together they studied and clarified the halachos of Shabbos, learning together from two until seven in the morning, when Shacharis began. Then he began to write the sefer, which was received with overwhelming popularity and became one of the fundamental sefarim in every Jewish home. It was eventually translated into 12 languages.

For the last 30 years of Reb Shlomo Zalman’s life, it was routine to see Rav Neuwirth climbing and descending the steps to the Auerbach home to discuss matters of hilchos Shabbos that were addressed in the sefer. After the first edition was printed, Harav Neuwirth sat with Rav Shlomo Zalman Auerbach and they learned the entire sefer, page by page, with Harav Auerbach writing annotations.

Rav Shlomo Zalman once said, “I don’t know how I can thank Rav Yehoshua Neuwirth for publishing all my halachos on hilchos Shabbos.” Reb Shlomo Zalman was so involved in the sefer it was almost as though it was his own.

Several weeks ago, Harav Neuwirth was hospitalized after feeling unwell. In recent days, his condition deteriorated rapidly, and he passed away on Tuesday morning. That same morning, he was supposed to have served as the sandak at his great-grandson’s bris. The bris took place after the levayah. On Tuesday evening, his grandson became bar mitzvah.

The levayah departed from his home in Bayit Vegan, passed the yeshivos that he headed, and was then taken to Har Hazeisim.

Harav Ezriel Auerbach called on the residents of Bayit Vegan to fulfill Harav Neuwirth’s will, which asks that people should preserve the holiness of Shabbos and welcome it 40 minutes before shekiyah, something that has become lax of late.

When the levayah reached Yeshivas Kol Torah, hespeidim were delivered by the Roshei Yeshivah, Harav Schlesinger and Harav Deutsch, and the Mashgiach, Harav Bordiansky.

He is survived by, ybl”c, children, grandchildren and many great- grandchildren, all of whom are following in his path, as well as his heartbroken talmidim.

This article appeared in print on page 1 of the June 12th, 2013 edition of Hamodia.