Tens of thousands of Jews gathered Sunday afternoon in Foley Square in Lower Manhattan to voice their anguish over the stated plans by the governing coalition in Israel to end draft exemptions for yeshivah students, altering a status quo that has been in place for 65 years.

The protest rally had been endorsed by some Gedolei Yisrael. Other Gedolim, both in the United States and in Eretz Yisrael — while equally opposed to the proposed draft — felt that a public protest was not advisable at this time.

The speakers at the rally stressed that the true goal of this draft was to forcibly tear away the youth from a Torah-true way of life. 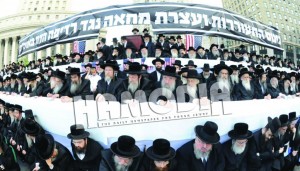 A kol korei  listing numerous Rabbanim, including,  the Kossover Rebbe and the Rav of the Boyaner kehillah in New York, was also publicized on Friday. The Belzer kehillah in New York also issued a letter stating that it was proper to join in the rally, and the protest was announced on Shabbos in the large shul of the Skverer Rebbe in New Square.