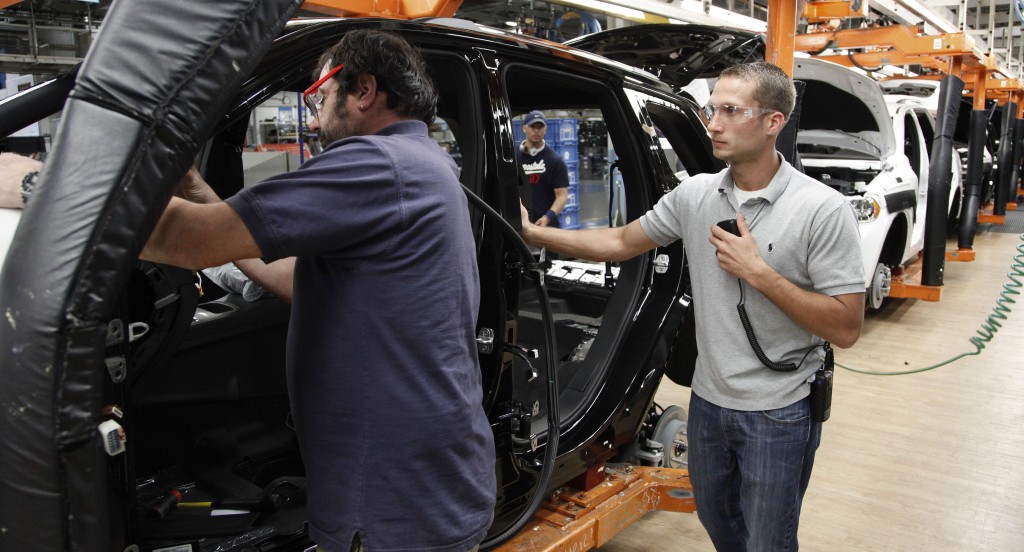 The auto industry is about to go on a hiring spree, as car makers and parts suppliers race to find engineers, technicians and factory workers to build the next generation of vehicles.

The new employees will be part of a larger, busier workforce. From coast to coast, the industry is in top gear. Factories are operating at about 95 percent of capacity, with many already running three shifts. As a result, some auto and parts companies are doing something they’ve been reluctant to consider since the recession: Adding floor space and spending millions of dollars on new equipment.

“We’re really bumping up against the edge,” says Michael Robinet, managing director of IHS Automotive, which forecasts auto production. “So it really is brick-and-mortar time.”

The auto industry’s stepped-up hiring will help sustain the nation’s job growth and help fuel consumer spending. On Friday, the government said U.S. employers added 175,000 jobs in May, roughly the monthly average for the past year and a sign of the economy’s resilience.

At 7.6 percent, U.S. unemployment remains well above the five percent to six percent that is typical of a healthy economy. Growth is still modest, in part because of higher taxes and government spending cuts that kicked in this year, as well as weak overseas economies. But the housing market is strengthening, and U.S. consumer confidence has reached a five-year high.

The auto industry’s outlook is bright. Vehicle sales for 2013 could reach 15.5 million, the highest in six years. To meet that demand, automakers must find more people. Hundreds of companies that make parts for automakers have to hire, too, just to keep up.

“As volume goes up, we will really need to add heads,” says Mel Stephens, a spokesman for Lear Corp., which manufactures automotive seats.

From January through May, automakers and parts companies hired 8,000 workers, a relatively slow rate. But the pace is picking up. The Center for Automotive Research expects the industry to add 35,000 over the full year.

Chrysler’s comeback gave Jeff Caldwell the confidence to leave a human resources consulting firm. Caldwell joined the company in February as an assembly line supervisor at a Jeep Grand Cherokee factory in Detroit. He supervises 100 workers, who build the SUV’s chassis.

“I knew Chrysler was moving in the right direction,” says Caldwell, 29, who was born in Detroit and always had an interest in cars. “They kind of reinvented themselves, and I really wanted to get in while I could.”

Among the hiring planned for this year:

Smaller companies also are joining in. Automotive business at Waukesha Metal Products, in Sussex, Wisconsin, is so strong that the company is near its capacity to make metal parts for axles, drive shafts and interiors. It’s adding $1 million worth of equipment near Milwaukee and building a plant in Mexico, to be closer to companies it supplies.

Most industry analysts predict that U.S. auto sales will rise gradually during the next five years. Estimates for this year range from 15 million to 15.5 million, compared with 14.5 million a year ago. LMC Automotive, a Troy, Michigan, forecasting firm, predicts that sales will gradually increase to 17 million in 2017. That level would be almost equal to the boom years of the late 1990s and early 2000s.

Analysts say sales will climb as more people reach driving age. Also, many consumers and businesses still have cars and trucks they bought  during the past decade or earlier. The average vehicle on U.S. roads is now a record 11.2 years.

The improving economy also helps lift sales. As the housing and construction sectors have come back to life, pickup sales have risen faster than the rest of the market. That has meant a job for Curtis Enkey of suburban Kansas City.

Enkey was laid off in April of last year, when Ford moved production of the Escape SUV from his factory near Kansas City to Louisville, Kentucky. He wasn’t supposed to come back until Ford started manufacturing a commercial van at his plant, in July or August. But higher sales of the F-150 pickup, which also is made at his factory, brought an early call to return.

Now Enkey is happily working 50-hour weeks. A Ford worker since 1995, he earns about $29 per hour, plus benefits.

Even with added hiring, however, the auto industry isn’t the job creator it once was. In 2005, before huge cuts began, more than 1.1 million people made motor vehicles and parts. Today, 798,000 do, according to the latest government statistics.

Auto companies pay engineers and many white-collar workers salaries that are competitive with the rest of the country. But wages and benefits in the factories have declined.

Most new hires will start at around $16 per hour, a little over half the pay that longtime workers get. The lower wage was a concession made by the United Auto Workers union to cut costs, as the companies ran into financial trouble six years ago. New hires receive health care, but get 401K plans instead of pensions, and they don’t receive health care in retirement, as longtime workers do. Still, their wages are better than most other factory workers, who make $13 to $14 per hour in the U.S.

The industry would be adding even more workers, if not for productivity gains made since the boom years, says Kristin Dziczek, head of the labor and industry group at the Center for Automotive Research.

Executives are being forced to rethink the hard lines they’ve drawn against adding space — and costs — since they closed factories during the economic downturn.

For instance, General Motors is building a 500,000-square-foot addition to its plant in Wentzville, Missouri, to handle expected sales of the next generation of midsize pickup trucks, due out next year.

But at Ford, executives want to keep costs down by squeezing as many cars and trucks as possible out of existing factory space, mostly by increasing line speeds and breaking up equipment bottlenecks.

“We are running a number of our plants pretty full,” says Joe Hinrichs, the company’s president of the Americas. “But we have more upside, if we need it.”

The recent hiring binge is even causing worker shortages in some areas. Skilled workers, such as engineers, machinists, software developers and welders, are hard to find, especially in the Detroit area.  In contrast, entry-level factory jobs, which start at around $15 per hour, are filled quickly.

“We’re having some pretty good success at finding people,” said Ken Kaiser, vice president of engineering for TRW Automotive. “But we’d like to find more, faster.”