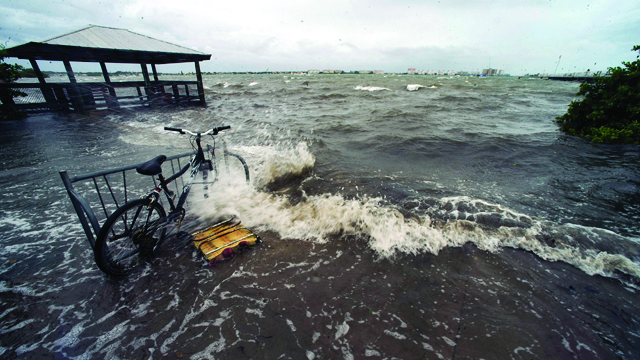 The first named storm of the Atlantic hurricane season smashed rainfall totals across the Northeast and pushed some streams and creeks over their banks but sped up the Eastern Seaboard without causing major damage.

A weakened Andrea shifted away from New England on Saturday morning with winds gusting up to 45 mph. The storm was expected to reach Canadian waters by Sunday.

After bringing rain, strong winds and tornadoes to Florida, Andrea lost most of its tropical characteristics late Friday into Saturday. But it brought record rainfall for the date of June 7 for many cities and towns in the Northeast.

Elsewhere, cars were submerged in floodwaters on Long Island, and about 50 residents were displaced by a rising stream in Chester, Pa. A retaining wall collapsed early Saturday in Manhattan’s Washington Heights neighborhood, sending an avalanche of rubble sliding into an apartment building and leaving three families homeless. The storm was blamed for one traffic-related death in Virginia.

Officials in the Mid-Atlantic region and Northeast had prepared for it Friday night. New York City activated its flash flooding plan, and heavy rainfall resulted in flash floods, causing some sections of roadways to be closed throughout Long Island.