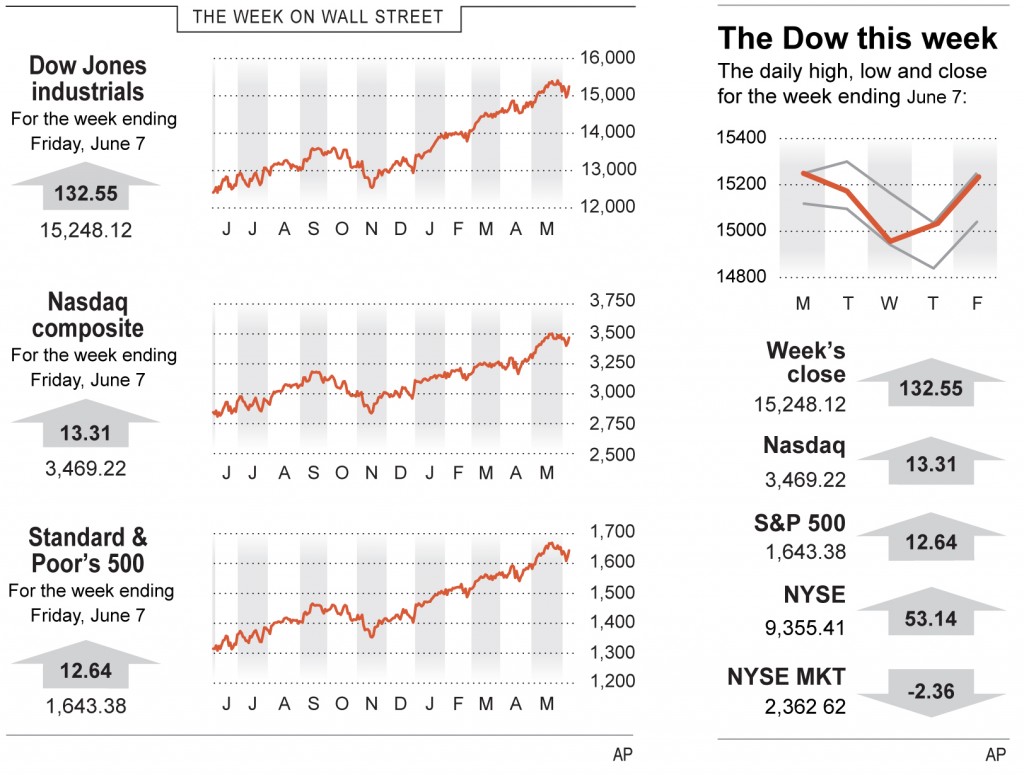 The 175,000 jobs added by U.S. employers last month was just what investors wanted. The number suggested that the economy is growing, but not so strongly that the Federal Reserve will pull back from its economic stimulus soon.

“This was, in our view, very much a ‘Goldilocks’ number,” said Phil Orlando, chief equity strategist at Federated Investors. “There is zero chance that the Federal Reserve is going to start tapering monetary policy” at its next two-day policy meeting starting June 18.

The central bank is buying $85 billion of bonds every month to keep interest rates low and encourage borrowing, spending and investing in riskier assets like stocks.

Stocks rose strongly Friday morning, then eased slightly in the early afternoon. The gains accelerated in the final hour of trading.

Nine of the 10 industry groups in the S&P 500 index rose, led by consumer discretionary stocks, which stand to benefit more than other sectors if the economy picks up. Industrial companies and banks also posted strong gains.

The only S&P 500 industry group that fell was telecommunications, a so-called defensive sector that investors favor when they are seeking safety and high dividends.

The S&P 500 index is down 1.6 percent since reaching a record high on May 21. The next day, Fed chairman Ben Bernanke said the Fed could ease up on its economic stimulus program in one of its next few meetings.

In government bond trading, the yield on the 10-year Treasury note rose to 2.18 percent from 2.08 percent late Thursday as investors moved out of safer assets.

The Labor Department’s monthly survey of employment is one of the most important gauges of the U.S. economy and receives close scrutiny from investors. It can frequently cause big moves in financial markets, especially if the report shows that employment is stronger or weaker than economists were expecting.

On May 3, the government not only reported a strong pickup in hiring in April but also revised sharply upward its estimates for job growth in February and March. That sent the Dow Jones industrial average past 15,000 for the first time, while the S&P 500 index broke through 1,600.

In the weeks following that report, bond yields rose from 1.63 percent as high as 2.20 percent May 31. That meant investors thought the economy was strengthening, dampening the appeal of low-risk assets like bonds. It also meant investors believed the Fed would act sooner than previously thought to curtail its bond-buying program.

Investors are still keeping an eye on interest rates because of the impact they have on the economy. For example, higher borrowing costs will push up mortgage rates and curb demand for housing. The recovery in the housing market has also boosted stock prices this year.

The improving economy has also helped support the dollar this year. The U.S. currency rose against the euro and the yen Friday.

The price of gold fell $32.80, or 2.3 percent, to $1,383 an ounce. Gold has fallen sharply this year as a rising stock market and a strengthening dollar have diminished its appeal as an alternative investment.