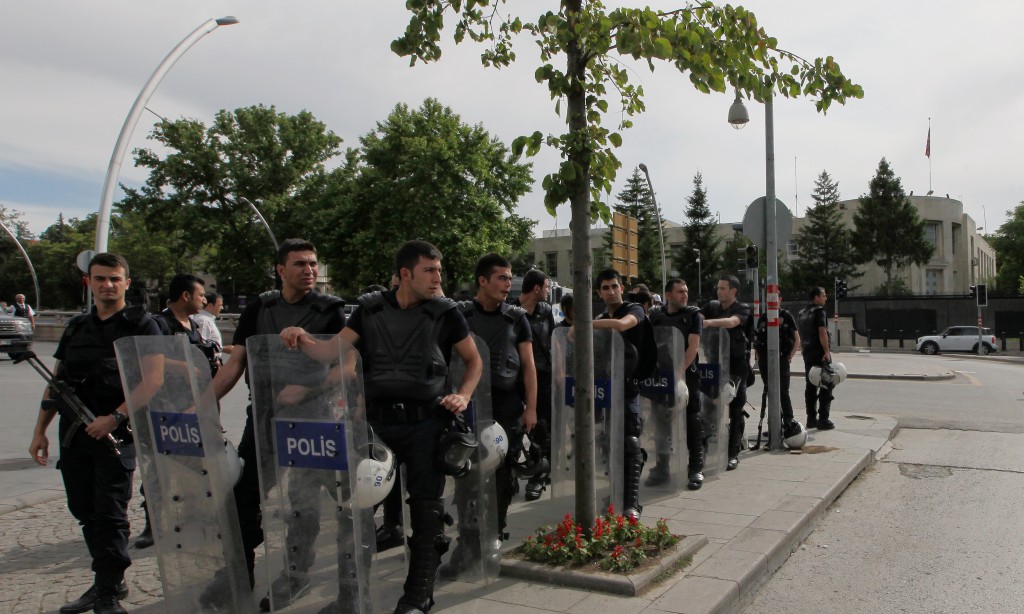 Turkey’s prime minister used less belligerent language Thursday but said he would go ahead with redevelopment plans that have sparked nationwide protests, in comments that could be decisive in determining whether demonstrations fizzle out or rage on.

Speaking at a news conference in Tunisia on the last leg of a four-day tour of North Africa, Recep Tayyip Erdogan acknowledged that some Turks have been involved in the protests because of environmental concerns, but insisted that terrorist groups are involved in the unrest in a country seen as a democratic model for the Middle East.

It appeared unlikely that Erdogan’s comments would calm demonstrators. Some headed to an airport in Istanbul in anticipation of the prime minister’s return home Thursday night.

Erdogan frequently spends weekends in Istanbul rather than in the capital, Ankara. It was unclear whether he chose to land in Istanbul because he has a strong support base going back to his days as the city’s mayor.

Investors appeared disappointed as Ergodan spoke, with Turkey’s main stock exchange dropping as much as 8 percent out of fear that continuing unrest would hit the country’s economy.

Tens of thousands of people have taken to the streets of Turkey’s cities in protests that began after police violently cracked down on demonstrators camping out to protest plans for a development in Istanbul’s Taksim Square.

The protests quickly spiraled into an outpouring of rage directed at Erdogan, whom the demonstrators see as increasingly autocratic and uncompromising. Anger has grown at police for frequent use of tear gas and water cannons, and a human rights group says thousands of people have been injured.

Erdogan rejects the charges of authoritarianism, saying he is a servant of the people.  In Tunisia, he said he had “love and respect” for protesters with environmental concerns.

“But as I told you earlier, some terrorist groups are involved,” he said, claiming that an outlawed left-wing terrorist group that carried out a suicide bomb attack on the U.S. Embassy in Ankara in February was also involved in the protests.

“They are involved. They have been caught in the streets and on social media,” he said.

Erdogan said the Islamic-rooted government had already apologized for the violent police crackdown on the Taksim sit-in, but insisted that tear gas was used everywhere in the world to break up protests.