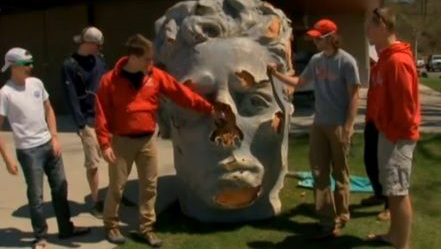 The giant floating head is missing.

Officials at Marist College in Poughkeepsie say the 300-pound Styrofoam and fiberglass replica of a man’s head found floating in the Hudson River in late April disappeared sometime last week.

The Marist men’s crew team spotted the strange object while practicing on the river. They towed it back to the team’s dock, where a Marist spokesman says the 7-foot-tall head was kept for a time in the college’s boathouse. It was moved outside because it took up too much space.

It’s still not clear where the object came from or how it ended up in the Hudson. It reportedly was part of a store display in New York City before being placed on a hill outside Oneonta by a couple who owned property in the area.