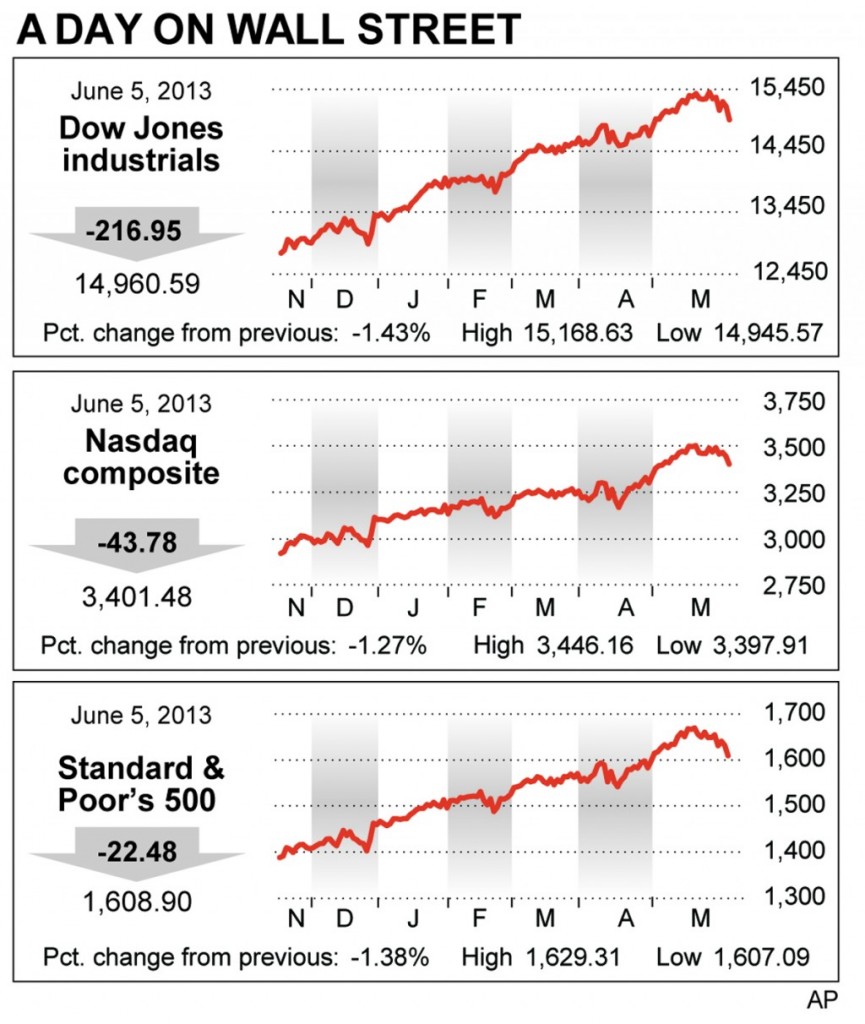 A series of weak economic reports sent the stock market plunging to its lowest level in a month on Wednesday.

Companies like miners, banks and chemical makers, whose fortunes are most closely tied to the prospects for growth, led the market lower. That’s a sign investors are becoming less confident in the U.S. economy.

The troubling data included weak hiring at private companies, a plunge in mortgage applications and sluggish orders to U.S. factories.

The Dow Jones industrial average fell 217 points and finished at 14,960, a drop of 1.4 percent. It’s the first close below 15,000 since May 6 and the biggest decline in seven weeks. Intel fell the most in the Dow.

Stocks started lower and declined steadily throughout the day. After rising every month this year and climbing to record levels this spring, some investors said a significant pullback was overdue.

“The rally is tired and people are taking some profits.” said Brad Reynolds, at investment advisor LJRP.

Investors were also unnerved by a sharp 11.5 percent drop in mortgage applications last week. That’s a disappointment because the rebound in housing has been one of the key factors supporting the stock market’s record-breaking rally this year.

The fall in applications came as mortgage rates rose the highest point since April 2012. The increase is being driven by higher yields in the bond market. The yield on the 10-year Treasury note climbed as high as 2.2 percent last week, the highest in more than two years.

There was also disappointing news on hiring, another one of the key supports for the market’s rally this year.

A measure of employment in the service sector fell to the lowest level since last July. That’s a troubling sign because service companies, a broad category that includes entertainment, transportation and health care, have been the main source of job gains in the past several months.

Earlier Wednesday payroll provider ADP said U.S. businesses added just 135,000 jobs in May, the second straight month of weak gains. The increases are much lower than those reported over the winter, which averaged more than 200,000 a month from November through February.

The stock market’s recent bout of volatility began May 22 as traders parsed comments from Federal Reserve Chairman Ben Bernanke and minutes from the last meeting of the Fed’s policy committee for clues about when the bank may slow its stimulus program.

Since then investors have become increasingly sensitive to economic reports as they try to anticipate when the Fed will pull back on its $85 billion in monthly bond purchases. That program, which is intended to keep interest rates low and encourage lending, has supported markets this year. On some days stocks have rallied after poor economic reports led traders to anticipate that the Fed would keep the stimulus going.

On Wednesday, though, the stock market’s decline was unambiguous.

As traders sold stocks, the moved money into the haven of U.S. government bonds. The yield on the 10-year Treasury note fell to 2.09 percent from 2.15 percent late Tuesday.

U.S. stocks joined a global rout Wednesday that began overnight in Asia. Japan’s benchmark Nikkei 225 index plunged after investors were disappointed at the lack of detail in a keynote speech on the economy from Japanese Prime Minister Shinzo Abe. The Nikkei fell 3.8 percent to 13,014.

The Nikkei has fallen 20 percent from its peak in mid-May, after soaring at the start of the year thanks to aggressive stimulus measures from the Bank of Japan. Some market watchers drew a parallel with the U.S., where central bank stimulus has also been pushing stock prices higher.