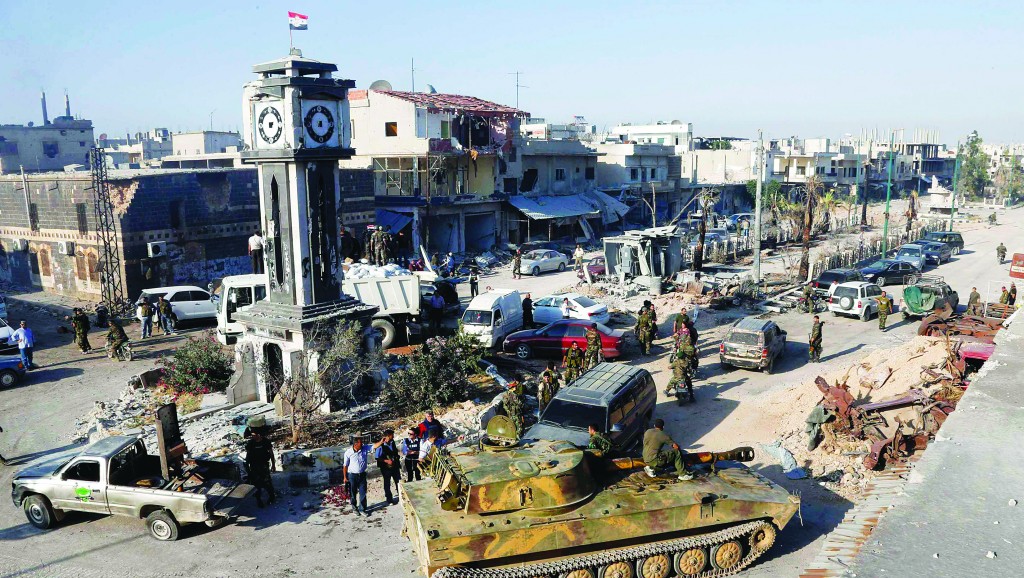 The Syrian army captured a strategic town near the Lebanese border on Wednesday after a grueling three-week battle, handing a heavy defeat to rebels and solidifying a shift in the country’s civil war in favor of President Bashar Assad’s regime.

Both sides had dug in for an all-out battle for Qusair, which rebels seized last year, a sign of its importance for both as a key crossroads of supply lines between Damascus and western and northern Syria. The regime assault also marked another key turning point in the conflict: the most overt involvement yet by its Lebanese Hizbullah allies, whose fighters boosted the military’s firepower in overcoming the rebels.

The town’s fall could boost the momentum for Syrian troops in rolling back rebel gains in central Syria in past months. The blow to the rebel movement could also further discourage it from entering peace negotiations with the regime, which the United States and Russia have been trying to put together in Geneva.

In a rare statement read on state media Wednesday, the Syrian military triumphantly declared that it had “cleansed” Qusair of rebels. It said the town’s capture was a “clear message to all those participating in the aggression against Syria” — a sign clearly directed at the rebels’ regional backers that the regime believes the tide is turning in the war.

Outnumbered and outgunned, rebel fighters held out for weeks after the regime launched its assault on Qusair on May 19. They inflicted heavier than expected casualties on the Hizbullah forces who joined the battle, forcing the group to admit its involvement as dozens of its fighters were brought home for burial. As fighting intensified, rebels called on fighters from all over Syria to come to their aid, and foreign terrorists were suspected to be playing a large role in the town’s defense.

But the rebels were running short of ammunition, and finally withdrew from the town after an intense bombardment overnight, according to the Syrian Observatory for Human Rights, a Britain-based activist group.

“The Assad regime and the Iranian militias supporting it have entered Qusair,” a statement by the main Western-backed Syrian National Council said, lamenting the “enormous imbalance in the balance of power.”

The mainly Sunni town — formerly home to some 40,000 people — was key for both sides. It lies on a land corridor linking two Assad strongholds, the capital of Damascus and an area along the Mediterranean coast that is the heartland of his minority Alawite sect.

For the rebels, who controlled the town since early 2012, Qusair was part of a supply line to Lebanon, serving as a conduit for weapons, fighters and supplies smuggled from Lebanon to the rebels inside Syria.

Capturing Qusair could open the way for the regime’s troops to move on rebels in other parts of central Homs province.

On the ground in the past two months, the Syrian army has moved steadily against rebels in key battleground areas, making advances near the border with Lebanon and considerably lowering the threat to Damascus, the seat of Assad’s government.

The fall of Qusair provides the best evidence to date that the growing participation of Hizbullah fighters alongside Assad’s troops is a potential game changer in the Syrian two-year-old conflict.

In the northeastern Lebanese town of Bazzalieh, near the city of Baalbek, Hizbullah supporters set up a check point on a main road distributing sweets to people in celebration. “Today, we defeated the other Israel,” said Ali al-Bazzal, 23, while waving a yellow Hizbullah flag.

But Hizbullah’s overt involvement has increased the Syria conflict’s slide toward a regional sectarian conflict. The war already risks spilling over into Lebanon, where Sunni-Shiite tensions have mounted and Syrian rebels have retaliated against Shiite towns near the Syrian border.