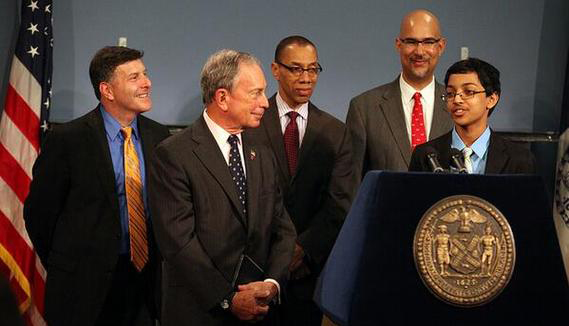 The winner of last week’s national spelling bee ate his first knaidel and acknowledged Mayor Michael Bloomberg’s “kvelling” over him at a City Hall ceremony Tuesday.

“It is incredible how much support, love and appreciation I received from New Yorkers over these last few years,” Mahankali, an eighth-grader with spectacles perched on the tip of his nose, said in his Indian accent. “I’m happy that I could make New York proud in my own little way.”

Bloomberg said that he has “actually been kvelling all day” over what he called a true New York moment that Arvind’s win heralded.

“Only in New York City could a child of Indian immigrants who speaks Spanish and Telugu compete for a trophy named for a British-American newspaper publisher and win the competition for spelling a Yiddish word,” Bloomberg said.

Bloomberg said that he and Arvind had shared knaidels from a nearby deli before the news conference. Three bowls of soup, each topped with a heavy dumpling, was placed nearby as they spoke.

Arvind, who said last week that he never tasted the food which blew him to stardom, had his first bite on Tuesday.

“It was actually very good,” he said. “It tasted excellent.”

Bloomberg, noting that Arvind will be attending Stuyvesant High School next year, asked him on the spur of the moment if he could spell his future school’s name.

“There have been some people on the streets in New York City who actually recognized me,” Arvind said. “They say congratulations. It feels weird. It’ll take some time getting used to.”