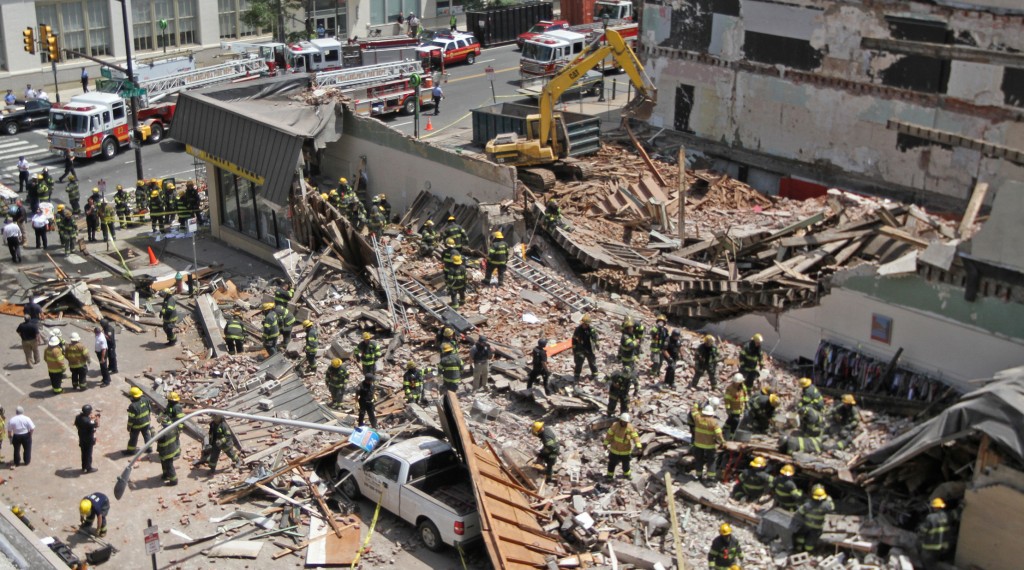 Two buildings collapsed in a busy commercial strip in Philadelphia Wednesday morning leaving at least 13 people injured and one and trapping one other, the fire commissioner said.

Rescue crews were trying to extricate the person still trapped amid the rubble inside the Salvation Army thrift store, which was nearly obliterated by falling debris, city Fire Commissioner Lloyd Ayers said. When asked about the person’s condition, he declined to comment.

It all began with sounds of the buildings crashing down with crumbling brick and snapping wood at 10:45 a.m., which one witness described as like “a freight train.”

One of the buildings, at 22nd and Market streets, was a commercial four-story structure, facing Market Street, that was already being demolished by excavators. An apartment building attached to the rear by a shared wall collapsed with it. In addition, a single-story building that housed a Salvation Army thrift shop next door suffered a partial collapse.

The buildings were reduced to a rubble of brick, wood and concrete. Firefighters and emergency crews dug frantically through the debris. Ambulances, fire trucks and police cars lined Market.

Nearby SEPTA service was impacted, including multiple trolley and bus routes.

Marc Newell was doing landscaping work on 22nd Street when he heard an “unbelievable rumble.”

The noise “was like a freight train,” Newall said. He said it was immediately clear that people were trapped inside.

“You could hear the moaning,” he said.