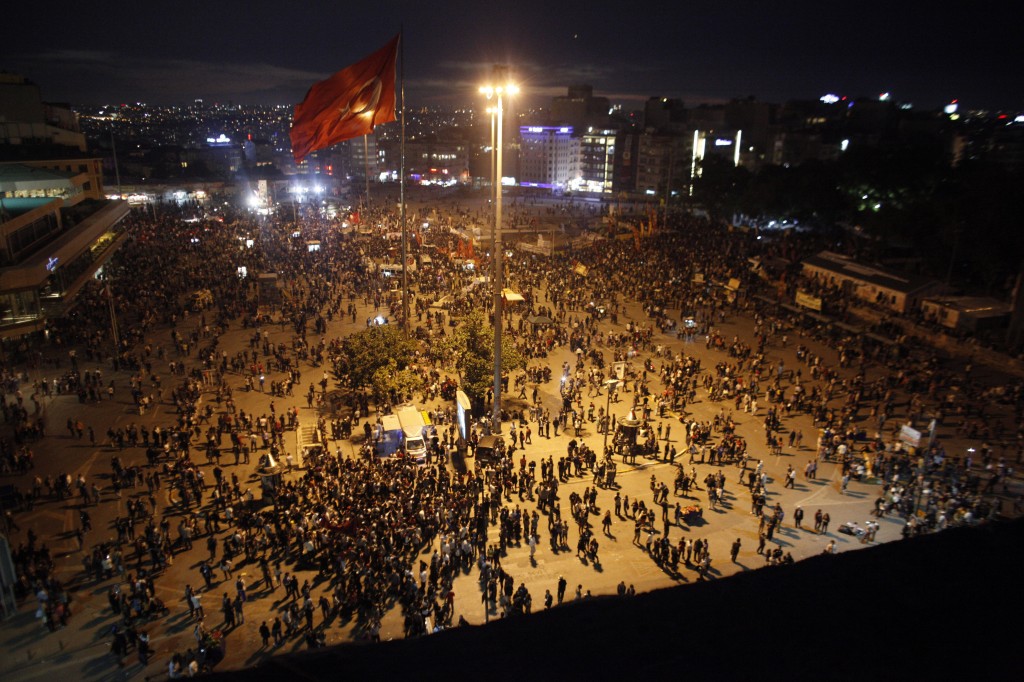 Turkey’s deputy prime minister apologized on Tuesday for “excessive violence” by police in an effort to defuse days of unrest, comments which contrasted sharply with Prime Minister Tayyip Erdogan’s defiant dismissal of the protesters.

With Erdogan abroad and strikes and demonstrations still rumbling on after five days, Deputy Prime Minister Bulent Arinc sought to assuage some of the anger at the government’s initial hardline response to what began as a sit-in against plans to build on an Istanbul park.

“The excessive violence that was used in the first instance against those who were behaving with respect for the environment is wrong and unfair,” Arinc told a news conference in Ankara. “I apologize to those citizens.”

“But,” he added, “I don’t think we owe an apology to those who have caused damage in the streets and tried to prevent people’s freedom.”

Arinc said he would meet some organizers of the original protest, campaigning against plans to build a replica Ottoman-era barracks on Istanbul’s Gezi Park in Taksim Square.

It appeared too little too late to end what has become a national outpouring of anger at Erdogan’s authoritarian style and Islamist inclinations, during which two have been killed and thousands injured, drawing alarm from Turkey’s Western allies in NATO at his response to the worst riots in decades.

Shops were shuttered on a main avenue leading to Taksim Square, as thousands of demonstrators chanting anti-government slogans marched by for a fifth day. Barricades of rubble blocked other streets leading to the square and the acrid smell of tear gas hung in the air.

The protests have included a broad spectrum of people opposed to Erdogan, some accusing him of an Islamist agenda which seeks to erode the secular foundations of the republic founded by Mustafa Kemal Ataturk 90 years ago, others opposed more broadly to what they say is his autocratic style.

Labor unions joined the demonstrations on Tuesday, adding to pressure on the government to acknowledge the grievances of a part of the population, even while it defends its actions as having the support of the majority who elected it.

“We are protesting the dictatorial nature of this government, which is against secular people,” said one among more than a dozen lawyers dressed in formal black court robes, heading a procession of public sector workers.

“We are here to protect the legacy of Ataturk and the Turkish state, which is the state we work for.”

A 22-year-old member of the main opposition youth wing was killed after being hit in the head at a rally in the southern town of Antakya near the Syrian border late on Monday, the second death after a taxi hit a protester in Istanbul on Sunday.

A rally for the Antakya victim, whom medics said appeared to have been hit by a gas canister, was planned later in Ankara.

Four other people were in a critical condition, the Turkish Doctors’ Association said, while around 3,000 had suffered light injuries such as breathing difficulties or minor lacerations.

The ferocity of the crackdown, which involved dawn raids on Thursday and Friday by riot police on peaceful campaigners camped in the park, has shocked even Erdogan loyalists and drawn international condemnation.

U.S. Secretary of State John Kerry said he was concerned by reports of excessive police force while Austrian Foreign Minister Michael Spindelegger warned Turkey not to put its relationship with Europe through an “endurance test.”

Turkey began formal accession negotiations with the European Union eight years ago but progress has been slow, partly due to concern over its record on human rights and freedom of speech.

“These operations have drowned the country in gas bombs. The prime minister has become so thoughtless as to describe the millions who exercise their democratic rights … as a ‘handful of marginal looters,’” KESK said in a statement.

Erdogan has dismissed the protests as the work of secular enemies never reconciled to the election success of his AK Party, which has roots in Islamist parties banned in the past but which also embraces center-right and nationalist elements. The party has won three straight elections and overseen an economic boom, increasing Turkey’s influence in the region.