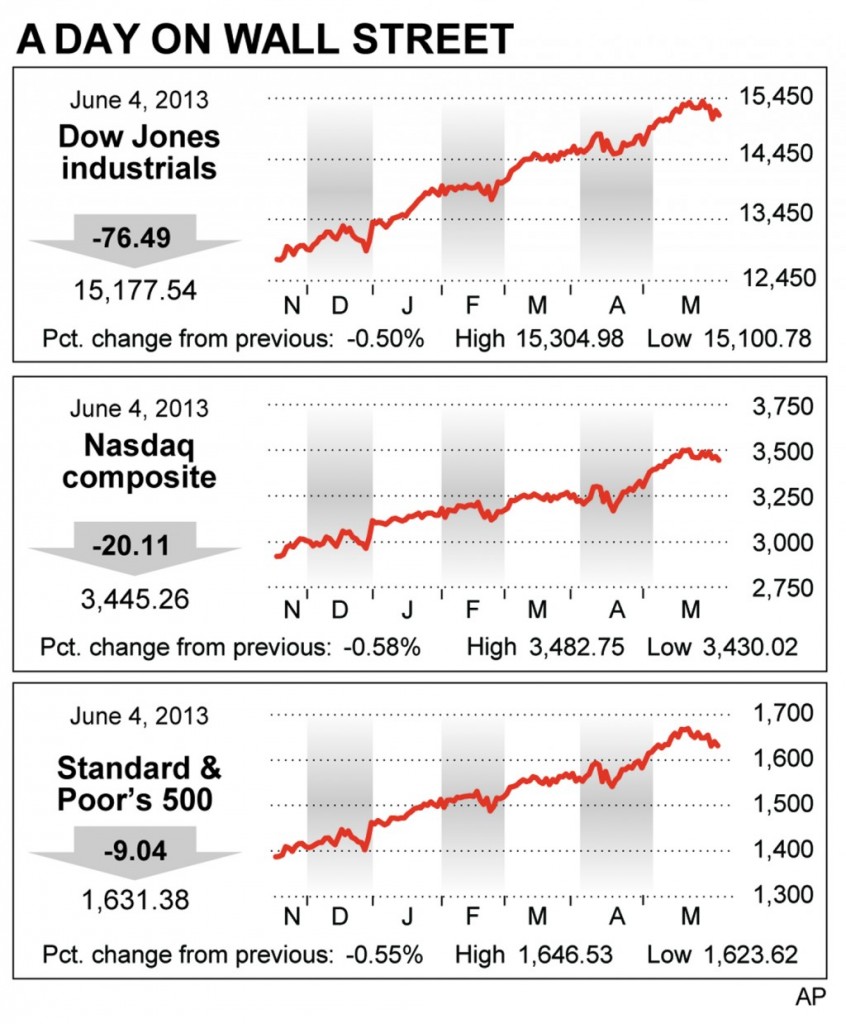 The Federal Reserve guessing game threw the markets for another loop Tuesday.

Comments from a Fed official raised expectations that the Fed could start easing off its support for the economy soon, sending the stock market sharply lower in the late afternoon. The market recovered in the last hour of trading to end with slight losses.

Snippets from a prepared speech by Esther George, president of the Kansas City branch of the Federal Reserve, were reported in the early afternoon. George pointed to “improving economic conditions” as well as evidence that financial markets were getting dependent on the Fed’s support. As a result, she said, “I support slowing the pace of asset purchases as an appropriate next step for monetary policy.”

“History suggests that waiting too long to acknowledge the economy’s progress and prepare markets for more-normal policy settings carries no less risk than tightening too soon,” George said, in a prepared speech she was set to give in Santa Fe, NM.

George didn’t give the speech because she was sick, but news outlets still reported her comments, and the Kansas City Fed posted the speech on its website.

It was the latest volatile turn in stock trading as investors try to figure out when the Fed will make a move.

While it’s well-known that the Fed’s next step will be to pare its bond-buying, nobody is sure when that will happen. As a result, traders have been trying to out-guess each other in anticipation of the Fed’s decision, seizing on comments from bank officials and minutes from a recent meeting of policymakers to send stock and bond prices swinging sharply over the past two weeks.

The next big data point for investors is the Labor Department’s monthly employment survey due out Friday. Oddly enough, a weak report might be encouraging to stock investors since it would imply that the Fed will keep buying bonds to support the economy.

That’s the reaction the stock market had on Monday, when traders interpreted an unexpected slowdown in U.S. manufacturing last month as the latest sign that the Fed wasn’t close to winding down its stimulus program.

The Fed has been buying $85 billion in bonds each month, helping to keep bond prices high and the yields they pay low. In theory, that should lead people to borrow and also shift money out of bonds and into other investments.

Many investors expect long-term interest rates to rise when the Fed scales back its bond-buying. If they climb high enough, more investors may be tempted to buy bonds instead of stocks. Trying to anticipate that outcome, many traders are pre-emptively selling stocks on the slightest signs that the Fed may be closer to slowing its stimulus.

The current yield of 2.15 percent on the benchmark 10-year Treasury note is extremely low by historical standards. It’s also nearly identical to the average dividend payment of 2.14 percent for stocks in the S&P 500.

It looked like the stock market was headed for a second straight day of gains at the start of trading Tuesday. Encouraging news about home prices and trade helped push the S&P 500 up 0.4 percent in the early going. It turned flat shortly before noon, slid 1 percent an hour later and then spent the rest of the day climbing back.

General Motors gained 1.6 percent on news that the company will be added to the S&P 500 index on Thursday, replacing H.J. Heinz Co. The ketchup maker is being acquired by Warren Buffett’s Berkshire Hathaway and the private equity firm 3G Capital. GM rose 54 cents to $34.96.