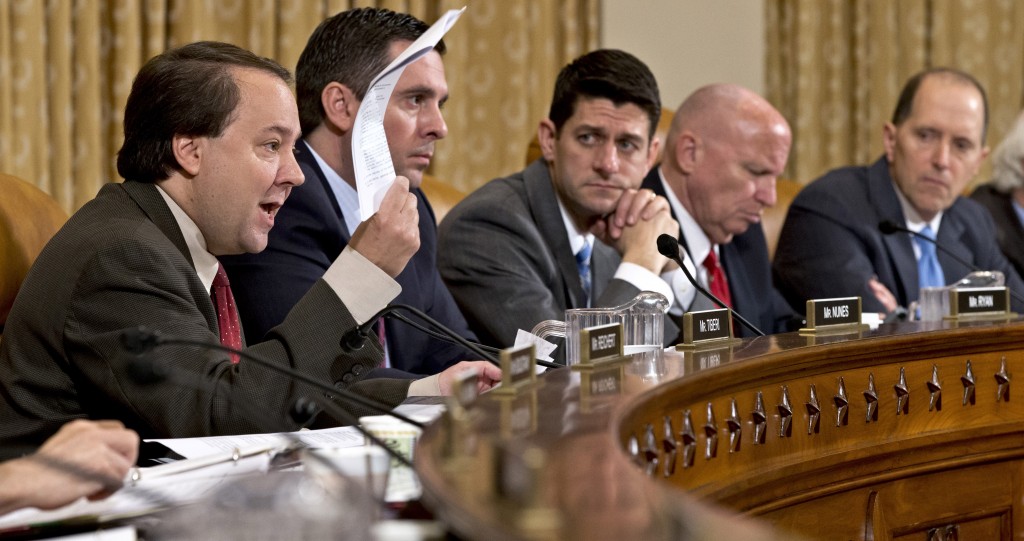 Already heavily criticized for targeting conservative groups, the Internal Revenue Service absorbed another blow Tuesday as new details emerged about senior officials enjoying luxury hotel rooms, free drinks and free food at a $4.1 million training conference. It was one of many expensive gatherings the agency held for employees over a three-year period.

A total of 132 IRS officials received room upgrades at the conference in 2010 in Anaheim, Calif., according to a report by J. Russell George, the Treasury Department inspector general for tax administration. The tax agency paid a flat daily fee of $135 per hotel room, the report said, but the upgrades were part of a package deal that added to the overall cost of the conference.

The report was made public on the same day leaders of six conservative groups testified at a congressional hearing, where they told lawmakers they had endured abuse from IRS agents as they spent years trying to qualify for tax-exempt status.

In often emotional testimony, the conservatives described the  IRS demands for details about employees’ and group officials’ political activities and backgrounds, for comments they’d posted on websites, for videos of meetings and information on whether speakers at such sessions voiced political views. Some said it took three years to get their tax-exempt status; others said they were still waiting.

Federal regulations say that tax-exempt social welfare organizations can engage in some political activity but the activity cannot be their primary mission. It is up to the IRS to make that determination of their level of political activity, and some Democrats at Tuesday’s House Ways and Means Committee hearing noted that some liberal groups also have had a hard time winning tax-exempt status from the IRS.

However, revelations about IRS agents improperly targeting Tea Party and other groups have led to investigations by three congressional committees and the Justice Department. One top IRS official was forced to
resign, another retired and a third was placed on paid administrative leave.

Tuesday’s report by the inspector general suggests the agency has struggled with management issues beyond the division that handles tax-exempt applications. According to the report, expensive employee conferences were approved with few restraints or safeguards until new rules were imposed in 2011.

In all, the IRS held 225 employee conferences from 2010 through 2012, at a total cost of $49 million, the report said. The Anaheim conference was the most expensive, but others were costly, too.

All of these conferences would violate new rules imposed by the White House budget office in 2012 that cap expenses for a single conference at $500,000. In 2010 alone, the IRS had 13 conferences that cost more than that.

By comparison, the General Services Administration was widely criticized for a 2010 conference in Las Vegas that cost $823,000.

Acting IRS Commissioner Danny Werfel called the conferences “an unfortunate vestige from a prior era.” Werfel took over the agency about two weeks ago, after the President forced the previous commissioner to resign.

“Taxpayers should take comfort that a conference like this would not take place today,” Werfel stated.

The inspector general’s report focused on the Anaheim conference, which was held for 2,609 managers in the agency’s small business and self-employed division. At the conference, the commissioner of the tax-exemption division, Christopher Wagner, stayed in a presidential suite that normally cost $3,500 a night. Wagner became chief of the IRS office of appeals in 2011 and retired this year.

His deputy, Faris Fink, stayed in a room that normally cost $1,499 a night, the report said. Fink was promoted to commissioner of the small business and self-employed division in 2011. He still holds the position, according to an IRS spokesman.

The actual room expense was far less, the report said, though the upgrades pushed the conference cost higher.

Without the upgrades, the report said the IRS could have negotiated a lower room rate, as required by agency procedures.

The IRS paid two event planners a total of $133,000 to organize the Anaheim conference. The planners were paid a percentage of the hotel room costs, which removed incentives for them to negotiate lower fees, the report said.

The IRS said in a statement, “Many of the issues raised in the report, such as the use of event planners, the receipt of room upgrades and the welcome reception and breakfast provided by the hotel, were complimentary and did not entail the use of any additional government resources.”

However, the report said the inspector general “believes that the costs for the conference could have been reduced if the IRS had not requested the numerous concessions from the Anaheim hotels and had instead negotiated for a lower room rate.”

The IRS has been under heavy criticism since last month, when a previous inspector general’s report showed that agents in a Cincinnati office had singled out Tea Party and other conservative groups for additional scrutiny when they sought tax-exempt status during the 2010 and 2012 election campaigns.

At Tuesday’s hearing, Ways and Means Committee Chairman Dave Camp, R-Mich., said such an IRS focus was creating a “culture of political intimidation and discrimination.” He said the agency’s targets were “Americans who did what we ask people to do every day — add their voice to the dialogue that defines our country.”