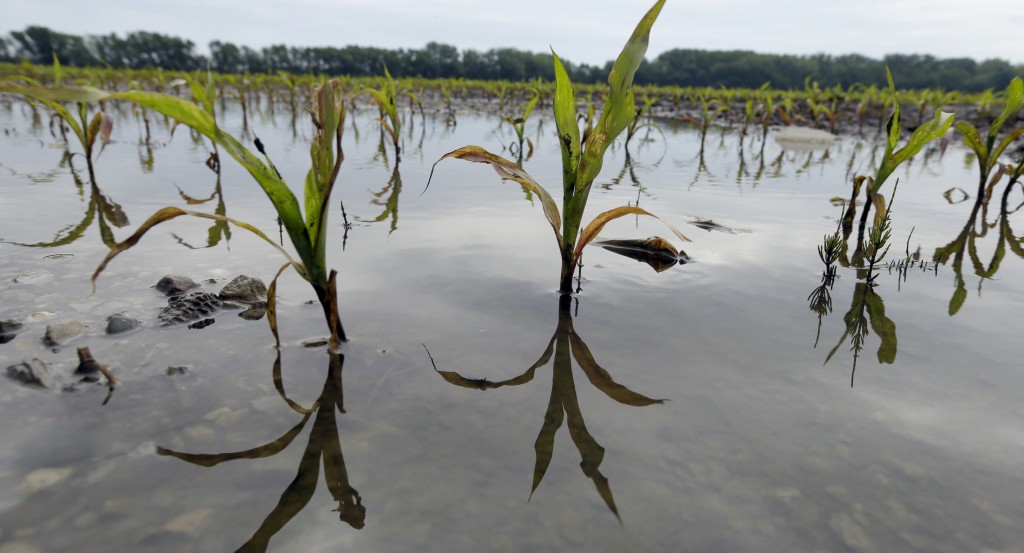 It’s decision time for many Midwestern corn farmers stuck in one of the wettest springs ever: Plant late in ground that’s been too wet, replant corn in muddy fields or collect crop insurance.

The U.S. Department of Agriculture said 91 percent of the nation’s corn crop is in the ground but just 74 percent of the plants have emerged. But some states — leading corn producer Iowa, Minnesota, Missouri and North Dakota — are much further behind.

“We’ve had as much rain in the last month-and-a-half as we did last whole growing season,” said Kevin Rempp, 55, who farms in central Iowa near Montezuma.

Only 88 percent of Iowa’s corn crop has been sowed. Normally, it’d be finished by now. Rempp is fortunate to have higher ground, and all 1,200 acres of corn and soybeans are planted.

“It’s just one of those deals where Mother Nature has given us a different hand to play this year and we’re trying to make the best of it,” he said.

If the skies clear and the growing season is favorable, it’s still possible to have an abundant corn harvest, which would help moderate price swings and keep food and beverage prices steady. So far, weather concerns have driven corn prices up nearly 10 percent in the past week-and-a-half.

But farmers can’t look too far into the future when they’re faced with waterlogged fields. Wisconsin lags the most, with just 74 percent of the crop in the field.

The problem is that rain keeps coming an inch or two at a time, saturating the heavy clay soil. With little sun and temperatures hovering about 10 degrees lower than usual, fields aren’t drying.

“About the time it dries up, we get another shot of rain,” he said.

Corn farmers who choose to plant unfinished fields or go back and replant this late will see a sizable reduction in the grain they harvest this fall, said Roger Elmore, an Iowa State University agronomy professor and a corn specialist.

In central Illinois, John Olsson finds himself woefully behind in planting his 700 acres of corn, figuring he’s about 70 percent done. Last year at this time, he was already on to planting 600 acres of soybeans.

The corn he has in the ground looks good, but he worries that several acres of seed may have been washed away. He’s debating whether to replant it.

“It’s more important to me to get the remaining areas planted that are waterlogged, than patching in a poor stand on a few acres,” Olsson, 51, said from his farm near New Berlin.

Elmore said some may think about switching to a corn variety that matures more quickly to avoid running up against the first fall frost.

But in the wettest fields, insurance payments may be the best option, he said.

“There are a lot of fields that have been flooded or drowned out. Once the water goes down, they’ll have to be assessed for planting,” Elmore said.

Soybean farmers also are behind, with 44 percent of it in the ground, trailing the normal 91 percent. Elmore said soybean farmers have a little more flexibility than corn growers because the growing season and harvest is later.

“But the same thing is happening: We’re losing our best window of opportunity for planting,” he said.

The news isn’t all dire, though. In its first crop condition report of the season released Monday, the USDA said 93 percent of the corn crop is in fair, good or excellent condition, while 7 percent is either poor or very poor.

The relatively good numbers reflect better field conditions in Ohio and Indiana, where 98 percent of the crop is fair, good or excellent. Corn also is looking good in Kentucky and Tennessee.

One of the biggest worries now is that the rain will stop and drought will set in again. It didn’t emerge last year until June.

Corn and soybeans planted in wet soil don’t develop deep roots. If it gets too dry too quickly, those roots can’t reach the water and the plants will wither and die.

“The weather forecasters I talk to are still up in the air about what’s going to happen, but they still haven’t yet ruled out a drought,” Elmore said. “It would be about the worst thing that could happen. If it’s wet through June then turns out dry in July, we’re going to be in trouble.”