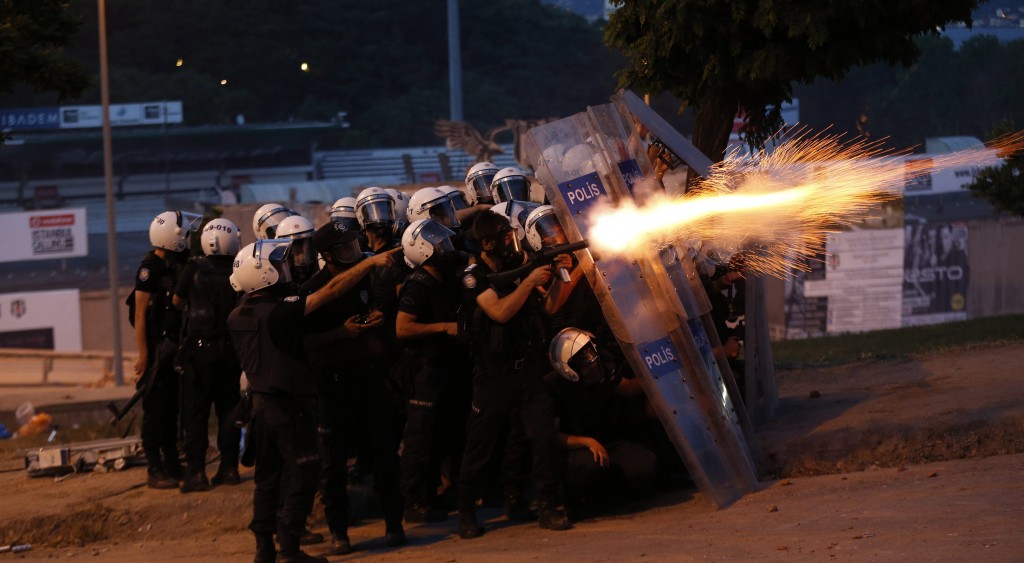 Turkish Prime Minister Tayyip Erdogan accused anti-government protesters on Monday of walking “arm-in-arm with terrorism” in remarks that risked further inflaming public anger after three days of some of the most violent riots in decades.

Hundreds of police and protesters have been injured since Friday, when a demonstration to halt construction in a park in an Istanbul square grew into mass protests against a heavy-handed police crackdown and what opponents call Erdogan’s authoritarianism. Protests have been held in dozens of cities.

The demonstrations showed no sign of abating on Monday with protesters returning to Taksim Square. Barricades of rubble hindered traffic alongside the Bosphorus waterway and blocked entry into the area. Leftist groups hung out red and black flags and banners calling on Erdogan to resign and declaring: “Whatever happens, there is no going back.”

In Ankara, police charged mostly teenage demonstrators and scattered them using tear gas and water cannon. Protesters had erected a barricade in the Kizilay government quarter and lit a fire in the road as a helicopter circled overhead.

Erdogan has dismissed the protests as the work of secular enemies never reconciled to the mandate of his AK party, which has roots in Islamist parties banned in the past but which also embraces center-right and nationalist elements. The party has won three straight elections and overseen an economic boom, increasing Turkey’s influence in the region.

“This is a protest organized by extremist elements,” Erdogan said at a news conference before departing on a trip to North Africa. “We will not give away anything to those who live arm-in-arm with terrorism.”

Turkey’s leftist Public Workers Unions Confederation (KESK), which represents 240,000 members, said it would hold a “warning strike” on June 4-5 to protest over the crackdown on what had begun as peaceful protests.

The unrest delivered a blow to Turkish financial markets that have thrived under Erdogan. Shares fell more than 10 percent and the lira dropped to 16-month lows.