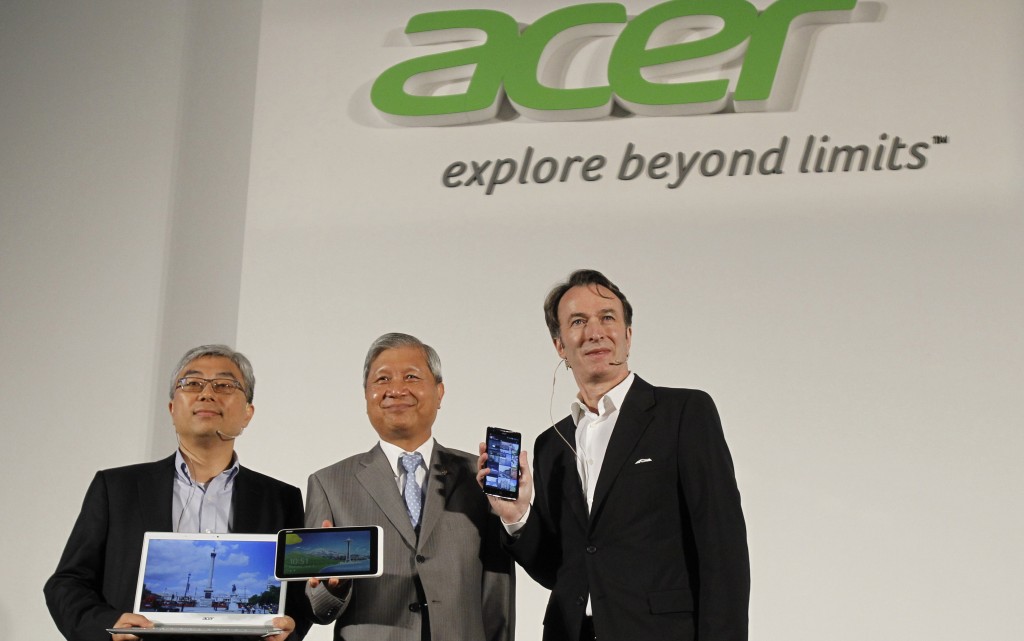 Taiwan’s struggling PC makers are unveiling a new generation of ultra-thin laptops at the world’s second-biggest computer show this week, even as they tap into the ever-expanding tablet market to help compensate for declining computer sales.

It won’t be an easy transition for them, but the makers hope the traditional glitz of the five-day Computex exhibit, opening Tuesday, will give them a good start in hyper-competitive markets.

The new Ultrabook crop boasts faster and more energy-efficient computing than the first generation, which was first launched in late 2011 but has so far failed to make much of a dent in tablet sales. Those have surged on the back of mobile and affordable web-surfing and entertainment displays.

The new Ultrabook crop runs on Intel-manufactured Haswell processors, which deliver images sharper than the Ivy Bridge architecture currently in use.

Software is still provided by Microsoft. But the Washington state company hopes its 7-month-old Windows 8 operating system will become more popular as consumers get more familiar with its interface. At Computex, a total of 65 Windows 8-based tablet and PC devices will be exhibited, Microsoft said.

At an Acer pre-Computex presentation Monday, group president Jim Wang said the computer vendor has “reinvented” itself over the past two years, engaging in “progressive design” that aims to not only satisfy users’ needs but also allow them to enjoy the devices.

Over the past several years, Acer has suffered from declining or static sales.

Wang unveiled the sleek, 8-inch, Windows 8-based Iconia W3 tablet that combines both home and office functions. He touted the device for “performing like a desktop” while allowing users to fold up the keyboard and carry the device in one hand.

Powered by Intel’s Atom chip, the tablet will be marketed later in June. Acer did not disclose the price.

Acer is quickly diversifying its tablet product line. The company has had initial success with two Android-based tablets, which sell for as little as $149 if the screen is 7 inches and $169 for the 7.9-inch variant.

Enhanced models of Acer’s flagship Aspire series of the tablet-laptop hybrid were also unveiled Monday. They include the widely praised Aspire R7, which features a hinge-attached pad that holds up the touchscreen and allows users to pull the screen closer or flip it over the keyboard, transforming it into a tablet.

The onslaught of Apple’s iPad and a host of imitators have cut deeply into Acer’s revenue, which has slipped from second to fourth place among PC vendors amid stalled sales.

The new models’ success will be crucial to Acer and others in the industry.

In the first quarter of 2013, global tablet shipments surged 142 percent, to 49 million units, over the same period last year, according to International Data Corp. The market is dominated by Apple and vendors selling Google’s Android devices. Latecomer Microsoft has less than a 4 percent share.

Meanwhile, global desktop and laptop shipments slipped 12.7 percent year-on-year to 78 million units in the first quarter of 2013, according to research firm Gartner Inc.

Analyst Vincent Chen of Taipei’s Yuanta Securities says that Acer’s recent innovations may help reverse the company’s decline, but that much more work remains to be done before it is out of the woods.

In attempting its current restructuring, Acer faces a formidable Asian rival in China’s Lenovo Group, which ranks a close second behind Hewlett-Packard Co. as the world’s biggest PC maker.

“Lenovo has had a more diversified product portfolio, making low-end and high-end PCs as well as smartphones, and has a deeper pocket to support its immense marketing needs,” Chen said.

AsusTek Computer Inc., the world’s fifth-largest and Taiwan’s second-largest PC vendor, has fared much better than Acer, and analysts attribute its relative success to the company’s persistent efforts in product innovation.

Among the products it is showcasing at Computex is a new generation Ultrabook that features a sleek, glossy glass case, as well as a new model of its widely praised Transformer tablet.

The Transformer series features a detachable keyboard with a two-sided display panel that can be used for work on one side and other functions, such as film transmission, on the other.

Asus’s Android-based tablets include the popular Nexus 7, which it jointly brands with Google. In the first quarter of 2013, IDC said its total tablet shipments came in at 2.7 million in the first quarter, ranking third behind Apple’s 19.5 million and Samsung’s 8.8 million.