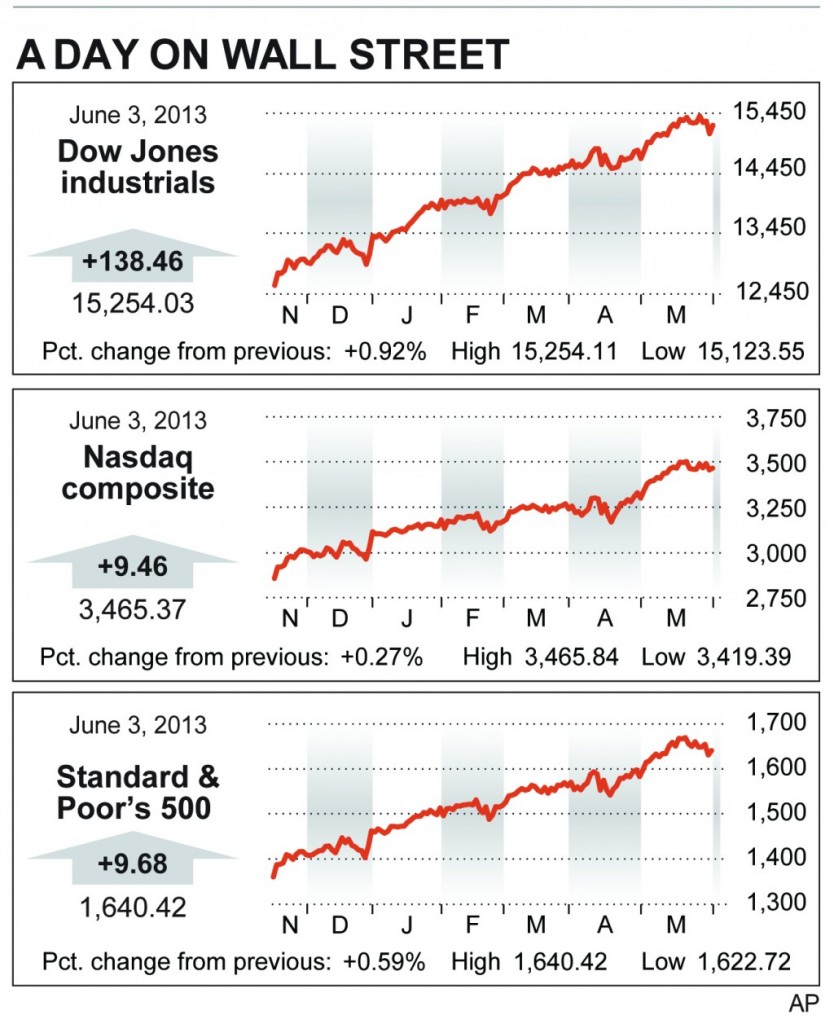 For now, bad news is good for the stock market.

Investors judged that the latest weak economic reports will make it more likely that the Federal Reserve will continue to stimulate the economy and support a rally on Wall Street.

On Monday, a measure of U.S. manufacturing fell in May to its lowest level since June 2009, as overseas economies slumped and weak business spending reduced new orders to factories.

That helped convince investors that the Fed will hold off from slowing down its $85 billion bond-buying program. Speculation that the central bank was set to ease that stimulus, a major support for this year’s rally in stocks, has caused trading to become volatile in the last two weeks.

The Standard & Poor’s 500 index fell in the morning after the manufacturing report was published at 10 a.m. It moved between gains and losses for much of the day, then climbed decisively in the last hour of trading.

The “good news is bad news” interpretation of economic reports may support stocks in the short term, but at the end of the day the economy has to keep improving for stocks to reach new highs, said Alec Young, a global equity strategist at S&P Capital IQ.

“This was a big miss on the ISM report,” said Young. “Regardless of what it means for the Fed, ultimately you’re buying a stream of earnings and you want to see the economy doing well.”

Federal Reserve Bank of Atlanta President Dennis Lockhart also helped allay investors’ concerns that the central bank was poised to stop the stimulus. He told Bloomberg Monday in an interview that Fed officials remain committed to the stimulus program.

The Nasdaq composite, heavily weighted with technology stocks, rose 9.45 points to 3,465.37, an increase of 0.3 percent.

The yield on the 10-year Treasury note ended the day barley changed from late Friday at 2.13 percent. The yield climbed as 2.17 percent in early trading, then went as low as 2.09 percent after the manufacturing report was released.

The yield, which is used to set interest rates on many kinds of loans including home mortgages, has been rising this month. It’s now about half a percentage point higher than at the start of May.

As Treasury yields fell, rich dividend-paying stocks like electric utilities and phone companies moved higher, reversing early losses. Those sectors, so-called defensive stocks, had been investor favorites in the first quarter but declined in May as bond yields rose.

Despite the advance Monday, signs are emerging that this year’s rally may be starting to falter. The Standard & Poor’s 500 index closed higher for a seventh straight month in May, but the index also logged its first back-to-back weekly declines since November. On Friday the Dow plunged 208 points, its worst drop in six weeks.

The Dow is still up 16.4 percent this year, and the S&P 500 is 15 percent higher. Stocks have surged as companies reported record earnings and on optimism that the housing market is recovering and hiring is improving.

Merck led the Dow higher after news crossed that the drugmaker announced encouraging clinical results for a medicine to treat skin cancer. Merck rose $1.75 to $48.45.