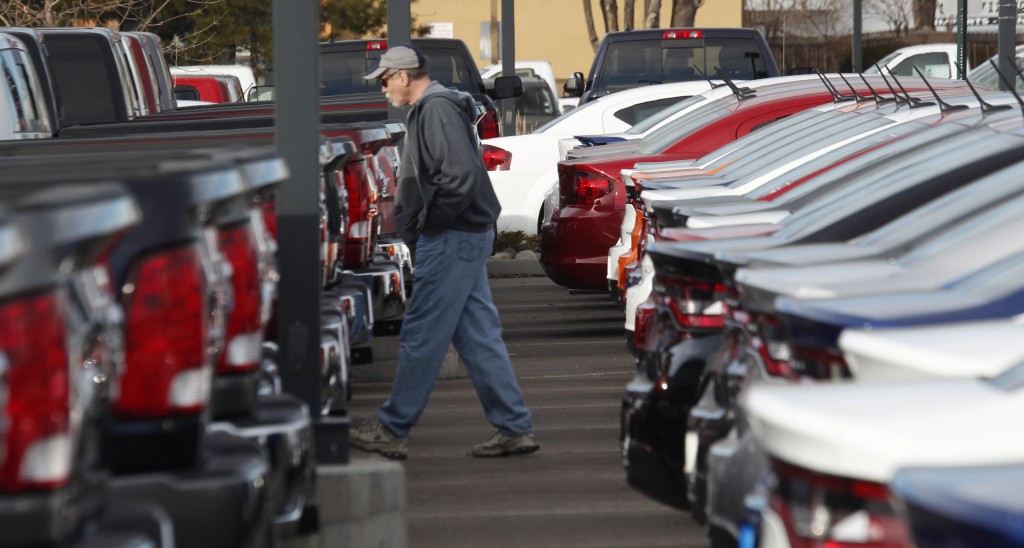 The full-size pickup market expanded 21 percent this year through May, almost triple the increase for all U.S. light vehicles, according to researcher Autodata Corp. Ford, Chrysler and GM, which have a stranglehold on the domestic truck market, are marketing more efficient pickups as rebounding housing and energy sectors boost demand.

“New home construction remains really the driving force behind growth in the pickup truck market, not to mention the fact that the energy markets have been booming out there,” Alec Gutierrez, an industry analyst for Kelley Blue Book, said in a telephone interview. “It means a ton for the domestic manufacturers. They really dominate the segment.”

Ford’s sales increase topped the 11 percent average estimate of 13 analysts in a survey by Bloomberg News. The Dearborn, Mich.-based company plans to boost third quarter production by 10 percent to 740,000 vehicles, according to Monday’s statement. Ford reiterated its forecast for an 8.5 percent rise in second-quarter output to 800,000 vehicles.

Sales for Chrysler, majority-owned by Fiat SpA, topped the 6.4 percent increase that was the average of 13 estimates. The company’s U.S. sales have increased for 38 consecutive months, as Chief Executive Officer Sergio Marchionne loads its lineup with redesigned Ram trucks, Jeep sport-utility vehicles and new cars such as the Dodge Dart. Fiat rose 3.3 percent in Milan trading, to the highest in 22 months.

The annualized industry sales rate, adjusted for seasonal trends, rose to 15.3 million, Autodata said in an e-mailed statement. The pace exceeded the 15.2 million average estimate of 17 analysts, and is up from 14 million a year earlier, keeping the market on pace for its best year since 2007.

Consumer confidence climbed in May to the highest level in more than five years, and home prices advanced by the most in seven, as the housing rebound gives the U.S. economy a lift. Oil production, which grew by the fastest pace in U.S. history last year, is accelerating in 2013 as horizontal drilling and hydraulic fracturing, or “fracking,” unlocks crude trapped in formations such as North Dakota’s Bakken shale.

“With the great performance that we’re seeing in the housing sector of our economy, we feel very good about the full-size pickup truck segment as we move through the year,” Erich Merkle, Ford’s sales analyst, said on a conference call.

The strong truck demand and fresh cars from Detroit – such as Ford’s Fusion, Chrysler’s Dart and GM’s Cadillac ATS – paced a sweep of first-quarter U.S. market share gains for the three companies for the first time in two decades.

The gains that U.S. brands are making are propelled by a “fundamental shift in consumer perception” that recognizes their improved vehicles, said Jim Press, a former sales executive with Toyota and former deputy CEO of Chrysler.

“Their products are equal to or better than all import brands, giving consumers the green light to purchase American with pride,” Press said in an e-mail. “The imports’ biggest nightmare is Detroit’s fondest dream.”

U.S. automakers are responding by raising production. Ford said last month that it will add capacity to build 200,000 more vehicles annually, on demand, in North America, for Fusion sedans and F-Series pickups. The company also will idle most of its North American assembly plants for one week this summer instead of two, increasing output by about 40,000 cars and trucks.

Three of Chrysler’s assembly plants and all but one of its engine, transmission and stamping factories will skip summer shutdown this year. Since its 2009 bankruptcy, GM hasn’t had a formal summer shutdown, Mark Reuss, president of the company’s North American operations, told reporters last month. Automakers record revenue when vehicles are shipped to dealers.

Deliveries were projected to increase 5.5 percent for GM in May, the average estimate of 13 analysts. Cadillac sales rose 40 percent, while sales of Chevrolet, GM’s largest brand, climbed 0.9 percent. Toyota sales were estimated to increase 3 percent, the average of eight analysts’ projections.

Detroit’s more competitive entries are slowing down Hyundai Motor Co. and Kia Motors Corp., after the Seoul-based affiliates combined to gain market share for 13 consecutive years through 2011. Hyundai and Kia are giving up more ground to the American automakers this year than Japanese companies, whose rebound last year from a tsunami a year earlier snapped their run of gains.

The trend continued this month, with combined Hyundai and Kia sales rising 1.6 percent from a year earlier, the smallest gain among major automakers.

Hyundai and Kia beat the 1.6 percent decline that was the average estimate of seven analysts. Combined U.S. sales for the two Seoul-based affiliates fell 1.4 percent through May in a market that grew 7.3 percent, according to Autodata.

Nissan was projected to lead all automakers with a 22 percent increase in U.S. sales, the average of eight estimates. The Yokohama, Japan-based automaker last month cut the price of seven models, including its top-selling Altima sedan.

Honda sales were projected to gain 5.7 percent in May, the average of eight analysts’ estimates. Toyota, Nissan and Tokyo-based Honda may benefit from the 20 percent decline in the yen against the dollar since Oct. 31, which could give the Japanese companies the ability to stuff their cars with more content without raising prices.

Volkswagen AG, based in Wolfsburg, Germany, reported a 2.2 percent increase in sales for its VW and Audi brands in May, falling short of the 7.7 percent gain that was the average of four estimates. VW brand sales slipped 1.7 percent, while Audi deliveries jumped 15 percent, according to company statements.

“If people have a reasonable measure of security in terms of their employment outlook, this is a terrific time to be out purchasing vehicles,” Jonathan Browning, chief executive officer of Volkswagen Group of America, told reporters on a conference call.