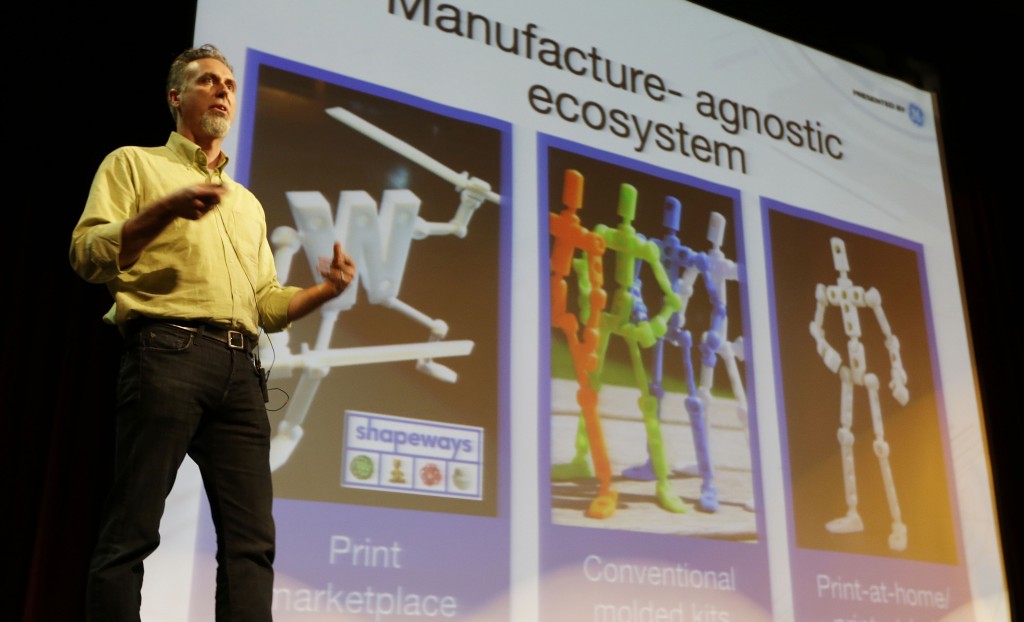 Invisalign, a San Jose company, uses 3-D printing to make each mouthful of customized, transparent braces. Mackenzies Chocolates, a confectioner in Santa Cruz, uses a 3-D printer to pump out chocolate molds. And earlier this year, Cornell University researchers used a 3-D printer, along with injections of a special collagen gel, to create a human-shaped ear.

Once a science-fiction fantasy, three-dimensional printers are popping up everywhere, from the desks of home hobbyists to Air Force drone research centers. The machines, generally the size of a microwave oven and costing $400 to more than $500,000, extrude layer upon layer of plastics or other materials, including metal, to create 3-D objects with moving parts.

Users are able to make just about anything they like: iPad stands, guitars, jewelry, even guns. But experts warn that this cool innovation could soon turn controversial – because of safety concerns, but also the potential for the technology to alter economies that rely on manufacturing.

“We believe that 3-D printing is fundamentally changing the manufacturing ecosystem in its entirety – how and where products are made, and by whom,” said Peter  Weijmarshausen, CEO of New York-based Shapeways, an online company that makes and sells 3-D printed products designed by individuals. Products include a delicate, twig-like egg cup (cost: $8.10) and a lamp that looks like a nuclear mushroom cloud (cost: $1,388.66).

“We’re on the verge of the next industrial revolution, no doubt about it,” added Dartmouth College business professor Richard D’Aveni. “In 25 years, entire industries are going to disappear. Countries relying on mass manufacturing are going to find themselves with no revenues and no jobs.”

On ground, sea or air, when parts break, new ones can be made on the spot, and even the tools to install them can be made, eliminating the need for staging parts in warehouses around the world, said Jeff DeGrange, vice president of Direct Digital Manufacturing at Stratasys Inc., currently the industry leader in a field of about 50 3-D printer companies.

Airplane mechanics could print a replacement part on the runway. A dishwasher repairman could make a new gasket in his service truck. A surgeon could print a knee implant custom-designed to fit a patient’s body.

But the military, D’Aveni said, is likely to be among the first major users of 3-D printers, because of the urgency of warfare.

“Imagine a soldier on a firebase in the mountains of Afghanistan: A squad is attacked by insurgents. The ammunition starts to run out. Is it worth waiting hours and risking the lives of helicopter pilots to drop it near you, or is it worth a more expensive system that can manufacture weapons and ammunition on the spot?” he said.

In the past two years, the U.S. Defense Department has spent more than $2 million on 3-D printers, supplies and upkeep, according to federal contract records. Their uses range from medical research to weapons development. In addition, the Obama administration has launched a $30 million pilot program that includes researching how to use 3-D printing to build weapons parts.

NASA is also wading into this arena, spending $500,000 in the past two years on 3-D printing. Its Lunar Science Institute has published descriptions of how it is exploring the possibility of using the printers to build everything from spacecraft parts while in orbit to a lunar base.

While the U.S. is pursuing the military advantages of 3-D printing, it’s also dealing with the potential dangers of the technology. On May 9, the State Department ordered a group to take down online blueprints for a 3-D printable handgun, and federal lawmakers and some state legislatures are contemplating proposals to restrict posting weapons plans in the future.

Since 2007, when these printers first entered the mainstream marketplace, sales have grown by 7.2 percent each year, according to IBIS World, a company that tracks the industry. Sales are projected to jump from about $1.7 billion in 2011 to $3.7 billion in 2015.

Cliff Waldman, a senior economist at the Manufacturers Alliance for Productivity and Innovation, a group that promotes the role of manufacturing in global economies, said it’s still too soon to know exactly what impact this 3-D technology could have on more traditional manufacturing. However, he doesn’t envision it changing the “fundamental shape” of manufacturing, as others suggest.

“I think 3-D has the capacity to impact both products and processes,” he said. “I am not ready to say that it is completely disruptive, however. It might be in a few narrow industries.”

Starting in June, office supply chain Staples plans to be the first major retailer to supply 3-D printers with “the Cube,” a plug-in device that uses 16 colors and costs $1,299. And in September, the smallest and cheapest 3-D printer on the market – a printing pen priced from $50 – is due to start shipping. Similar to a glue gun, the 3Doodler plugs into the wall and is filled with cylinders of plastic that come out of a 518-degree Fahrenheit tip. Once the plastic leaves the pen, it cools and hardens.

Makers Peter Dilworth, an inventor at the Massachusetts Institute of Technology, and Maxwell Bogue, a toy maker, first pitched their pens earlier this year on a website for startup projects. They sought $30,000, and wound up collecting $2.3 million from more than 26,000 investors, who each got one of the 3-D pens. Four artists who teamed up with the men have used the pens to make a mini Eiffel Tower, earrings and butterfly pendants.