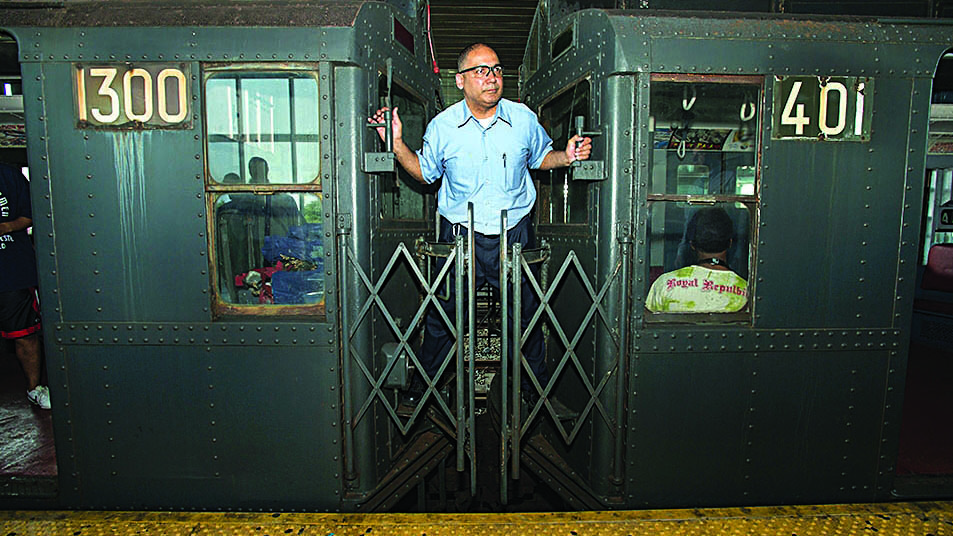 The cars were pulled out of storage for a one-time trip Thursday to commemorate the reopening of a 3.7-mile stretch of subway tracks in Queens that were badly damaged by Superstorm Sandy seven months ago. They were a far cry from the sleek, air conditioned silver trains people hop aboard each day.

Straphangers who just happened to be in the right place at the right time snapped pictures and gawked at the old-timey ads for Clark bars and Levy’s Rye Bread adorning the walls of the train running on the A line.

“This old train brings back a lot of memories,” said Ken Perl, a Brooklyn native who got on the train in Queens and decided to take it all the way to its last stop in Manhattan. “When I rode this train in the 1950s, I was four  or five.”

“To see these old seats, I just can’t believe it,” he said.

Charles Seaton, a spokesman for the Metropolitan Transit Authority, said the eight train cars were purchased from an order of 1,702 between 1930 and 1939. They ran on the old Independent Subway System, or IND line, when the city’s subway system was made up of three separate agencies.

The IND line was home to the lettered subways, and the cars operated on the opening of the original segment of the A line in 1932. They were retired in 1977 from the J line.

The cars were put into regular passenger service Thursday from Beach 116th Street in Queens to 168th Street in upper Manhattan after making the inaugural run in the Rockaways, where subway service between Howard Beach and Broad Channel had been closed since the late-October storm.

College student Evin Ye, who boarded the vintage train at Fulton Street in lower Manhattan, was caught totally off guard when he saw the old-school A train approaching his station.

“It looks like they stole it from the museum,” said Ye, 20, who got off at Penn Station — and snapped photos of the train’s rusted exterior with his cell phone. “It was very cool. Everyone was taking pictures.”