Stocks Plummet in Late Trading But End May Higher 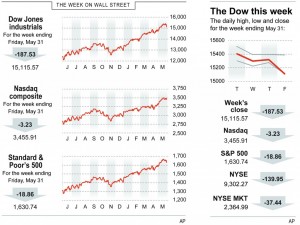 A gradual decline in the stock market turned into a rout Friday.

After moving between small losses and gains for most of the day, the stock market plunged in the final hour of trading. The Dow Jones industrial average lost more than 200 points, half of them in the last 15 minutes. It was the worst drop in six weeks.

Some traders said the afternoon swoon came as large investors rearranged their holdings to match changes in the widely followed MSCI indexes. Others said rapid-fire automated sell programs kicked in as the decline accelerated, exacerbating the loss.

By late Friday, the market looked like it was “feeding on itself,” said Mark Luschini, chief investment strategist at Janney Montgomery Scott. “Why did we go from trading flat to down 200 points at the close? It suggests to me that it was driven by computer models.”

The market managed to hold on to gains for the month, extending winning streaks for major indexes. The Standard & Poor’s 500 index ended May with its seventh straight monthly gain, its best run since 2009, but the last two weeks have been choppy. The index has declined on five of the last seven trading days and had its first two-week decline since November.

Traders and investors have started to question whether this year’s record-setting rally has run its course. Concern is building that the Federal Reserve may slow its $85 billion bond-buying program. The program has supported the stock market as investors move money out of bonds and into riskier assets. The bond purchases also hold down long-term interest rates to encourage borrowing and spending.

The market appeared to be headed for an inconclusive day of trading early Friday after both encouraging and disappointing news on the economy was reported. An unexpected decline in consumer spending in April was offset by news that a measure of U.S. consumer confidence jumped to the highest level in almost six years in May.

The late afternoon slide in stocks caught many market-watchers by surprise. Big investors may have gotten spooked at the end of the day and sold, says Steven Ricchiuto, chief economist at Mizuho Securities.

“In a thin market, all you need is one or two big money managers to reassess their view and the market can go down quickly,” Ricchiuto said.

MSCI, originally known as Morgan Stanley Capital International, provides a range of global stock indexes that professional investors track to measure their performance. The company reviews its indexes twice a year, adding some stocks and removing others.

In government bond trading, the yield on the 10-year Treasury note rose to 2.13 percent from 2.12 percent late Thursday. The yield has risen by half a percentage point since the start of the month and is the highest it’s been since April 2012. That has troubled some investors since a rapid rise in rates could curtail borrowing and spending.

The yields on Treasury notes are benchmarks for setting interest rates on many kinds of loans to consumers and businesses. The higher yields are already pushing mortgage rates higher. On Thursday the mortgage buyer Freddie Mac reported that average mortgage rates jumped this week to the highest level in a year.

“People are worried a rise in interest rates might derail the recovery,” says Joseph Tanious, the global market strategist at J.P. Morgan Funds.

It was the biggest loss for the index since April 15, when markets plunged after worries about an economic slowdown in China caused commodity prices to drop sharply.

The Dow managed its sixth straight month of gains.

This article appeared in print on page 8 of the June 3rd, 2013 edition of Hamodia.