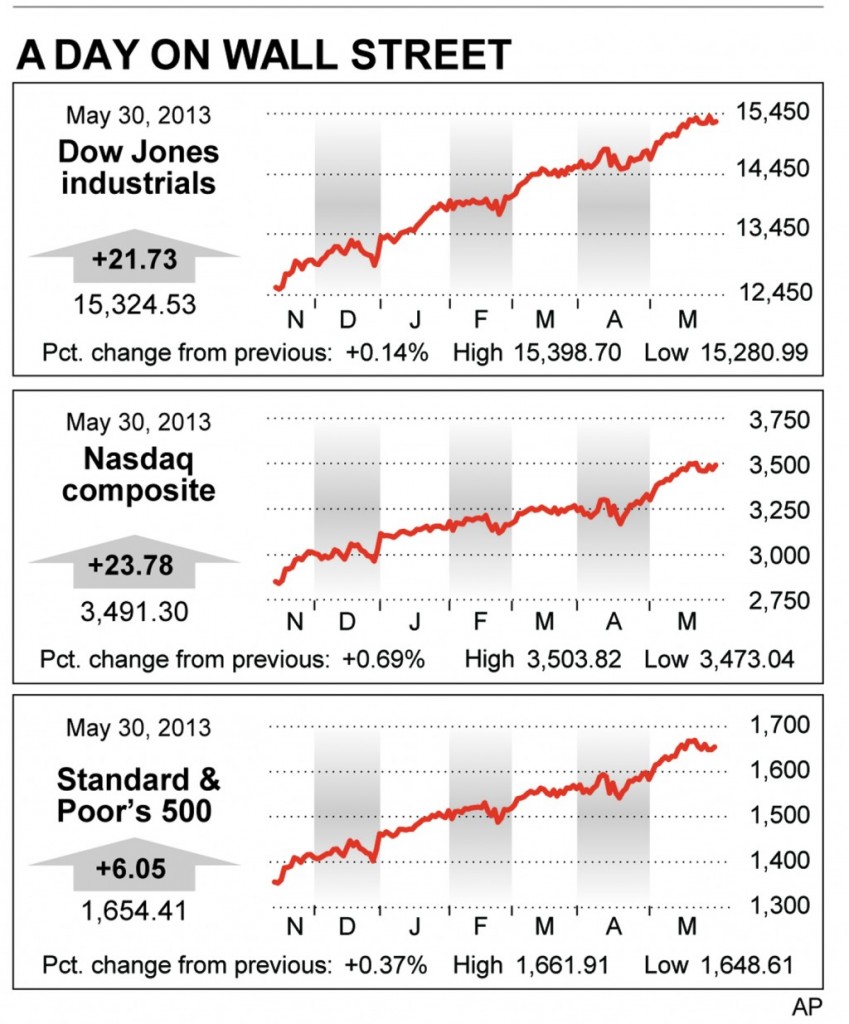 The stock market rose Thursday after a pair of lackluster economic reports raised expectations that the Federal Reserve will continue to boost the economy with its stimulus program.

Unemployment claims rose, and an initial estimate of first-quarter economic growth was revised slightly lower. That suggests the U.S. economy may still need some time to recover from its funk and that the Fed will keep up its $85 billion in monthly bond purchases.

The rise in the Standard & Poor’s 500 index was led by banking and insurance stocks, which gained 1.1 percent. Among individual bank stocks, Bank of America rose to its highest in more than two years. JPMorgan also climbed.

Banks and other stocks that stand to benefit the most from an improving economy have surged this week, a change from earlier in the year, when investors favored dividend-rich stocks like utilities. Now investors are selling dividend-rich stocks and buying so-called growth stocks. The S&P’s financial index is up 2.1 percent this week; its utilities index is down 2.5 percent.

Even after this week’s gain, by one measure bank stocks are still less expensive than the broader market. The price-to-earnings ratio for financial companies is 14.4 for banks and insurers, compared with 16.2 for all companies in the S&P 500 index, according to FactSet.

Stocks also got a boost from deal news.

NV Energy surged $4.34, or 23 percent, to $23.62, leading a broad advance in utility companies, after a company owned by Warren Buffett’s Berkshire Hathaway agreed to pay a premium of 23 percent to buy the Nevada-based power provider.

Clearwire, a wireless network operator, surged $1.02 cents, or 29 percent, to $4.50 after satellite operator Dish Network raised its bid for the company to $6.9 billion.

In economic news, the number of Americans seeking unemployment aid rose last week, a sign layoffs have increased, the Labor Department said Thursday. Claims for unemployment aid rose 10,000 last week to 354,000. The government also lowered its estimate for U.S. economic growth in the first three months of the year to 2.4 percent from 2.5 percent.

Trading has been choppy on Wall Street this week as investors wrestle with the question of whether the Fed will ease its economic stimulus. Minutes released last week from the Fed’s last policy meeting showed that some central bank officials favored slowing the purchases as early as next month if the economy improves enough. The program has been a major factor supporting a rally in stocks by encouraging investors to buy riskier assets.

The Dow Jones industrial average rose 106 points Tuesday, then fell by the same amount Wednesday, leading some market watchers to ask whether the rally that has pushed the Dow and S&P 500 index to record levels may be fizzling out.

Phone companies and the makers of consumer staples were the biggest decliners, dropping 1 percent and 0.4 percent respectively. These so-called defensive stocks that pay rich dividends have fallen out of favor this month after investors pushed their prices higher at the start of the year.

In government bond trading, the yield on the 10-year note was unchanged at 2.12 percent.