U.S. home prices jumped 10.9 percent in March compared with a year ago, the most since April 2006. A growing number of buyers are bidding on a tight supply of homes, driving prices higher and helping the housing market recover.

And in 15 cities, prices rose in March from February. That’s up from only 11 in the previous month. The monthly figures aren’t seasonally adjusted and may reflect the beginning of the spring buying season.

Prices rose in Phoenix by 22.5 percent over the past 12 months, the biggest gain among cities. It was followed by San Francisco (22.2 percent) and Las Vegas (20.6 percent).

New York City had the smallest year-over-year increase at 2.6 percent, followed by Cleveland at 4.8 percent.

“Rising home prices may begin to alleviate a lack of housing inventory … by encouraging more homeowners to put their properties on the market,” said Maninder Sibia, an economist with Economic Advisory Service, in a note to clients. “The housing market is clearly improving.”

The index covers roughly half of U.S. homes. It measures prices compared with those in January 2000 and creates a three-month moving average. The March figures are the latest available.

The U.S. housing market is steadily recovering, buoyed by solid job gains and near-record low mortgage rates. Sales of new homes rose in April to nearly a five-year high. And sales of previously occupied homes ticked up in April to the highest level in three-and-a-half years.

Despite the gains, a limited number of homeowners are putting their houses on the market. That’s helped lift home prices. And it’s made builders more willing to ramp up construction. Applications for building permits rose in April to the highest level in nearly five years.

The supply of available homes jumped in April, but was still 14 percent below its level a year earlier.

Stan Humphries, chief economist at Zillow, a real estate data provider, said that the increase in the Case-Shiller index has been skewed higher by cities such as Phoenix and San Francisco. Fewer homes are available in those areas because many homeowners still owe more on their mortgages than their homes are worth. That makes it difficult to sell.

Still, even excluding those markets, home prices are rising steadily nationwide, Humphries said. The increases are “certainly confirmation that the housing market is experiencing a brisk recovery,” he added.

The housing recovery is creating more construction jobs and bolstering the economy in other ways. Higher home prices make homeowners feel wealthier and encourages them to spend more.

Rising prices also encourage more would-be buyers to purchase homes, before prices rise further. They also enable more homeowners to sell homes, by reducing the number of people who owe more on their mortgages than the homes are worth.

Prices have been increasing steadily since last summer. Still, they are about 29 percent below the peak reached in July 2006.

Banks have raised their credit standards since the housing bubble burst, and are demanding larger down payments. That’s made it particularly hard for potential first-time buyers to get a mortgage. 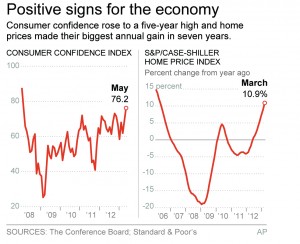