General Stocks Fall; Dow Average Pulls Back From a Record 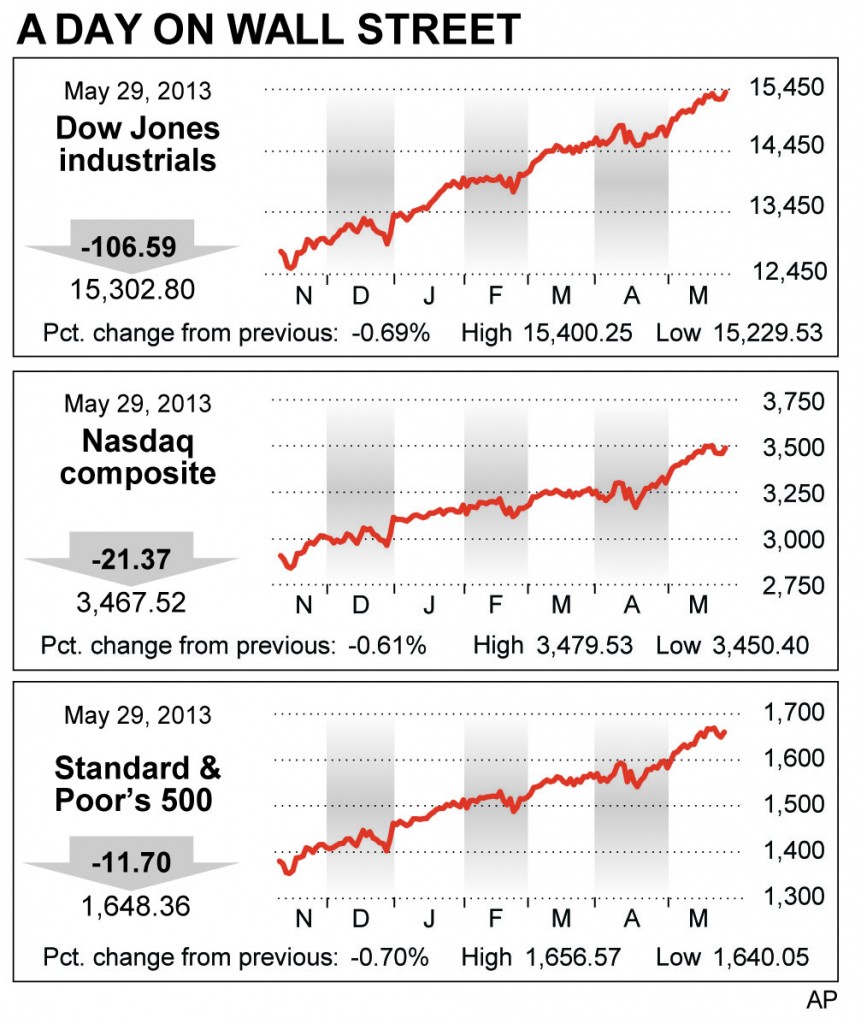 The stock market closed lower Wednesday, led by the same industry groups that had the biggest gains early in the year: rich dividend payers like power utilities and makers of consumer staples.

Rising bond yields have been an important factor behind that shift.

The yield on the 10-year Treasury note has risen sharply this month and is close to a 13-month high. That’s helping diminish the appeal of so-called “defensive” stocks that the market favored in the first three months of the year. Utilities stocks have slumped 9.2 percent this month.

More broadly, after this year’s powerful bull run — the Dow Jones industrial average is up 16.8 percent, the Standard & Poor’s 500 index 15.6 percent — investors may be running out of reasons to keep plowing money into the stock market.

The powerful run-up in stock prices has been encouraged by the Fed. The central bank has been buying $85 billion of bonds each month in an effort to keep interest rates low and encourage borrowing, lending and investing. With rates low, investors have sought stocks as an alternative to bonds.

Real estate investment trusts, or REITs, another investment favored by investors seeking income, have also been hit as Treasury yields climb. Vanguard’s exchange-traded REIT fund has fallen for five straight days, cutting its gains this year to 10.9 percent from 19.7 percent.

The Dow closed down 106.59 points at 15,302.80, a loss of 0.7 percent. That decline matched its advance the day before, when it closed at a record high, the ninth time it has done so this month. The Dow was down as much as 179 points in late morning trading, then rose moderately in the afternoon.

The S&P 500 is headed for a seventh consecutive month of increases, the longest winning streak since 2009. The Dow is on track to end higher for a sixth straight month.

Nine of the 10 sectors in the S&P 500 fell, led by declines of 1.9 percent for consumer staples and 1.5 percent for utilities. In the first three months of the year they were among the biggest winners.

Despite the decline in stocks, it seems too early to call an end to the rally. On several trading days this year, stocks have had sharp sell-offs, only to rise again as investors took advantage of the dip in prices to get into the market.

The yield on the 10-year Treasury note fell to 2.12 percent from 2.17 percent late Tuesday. The yield surged Tuesday to its highest level in 13 months as investors moved money out of bonds. The yield has risen sharply from 1.63 percent at the beginning of the month.

In another sign of shifting sentiment, a measure of investor’s expectations of market volatility has been increasing. The Chicago Board of Exchange’s VIX index climbed 2.7 percent Wednesday, its sixth increase in seven days.

— Smithfield Foods surged $7.38, or 28 percent, to $33.35 after the company agreed to be acquired by meat processor Shuanghui International Holdings for about $4.7 billion.

— Stewart Enterprises rose $3.23, or 33 percent, to $12.97 after the funeral company agreed to be acquired by Service Corp International for $1.1 billion in cash.

— Sallie Mae jumped 50 cents, or 2.2 percent, to $23.48. The company, which is formally named SLM Corp., announced a plan to split into two companies, one that manages student loans and a consumer banking business.

— Michael Kors Holdings rose $1.97, or 3.2 percent, to $63.95 after the fashion company reported that its profit more than doubled on surging sales in the fourth quarter, capping another strong year.