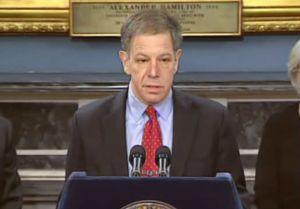 The commissioner of New York City’s Department of Homeless Services has been named to serve as state director of storm recovery.

Since 2010, Diamond headed the homeless services agency, which has been the target of intense criticism for a dramatic increase in homeless sleeping on the streets since Mayor Michael Bloomberg took office in 2002.

More than 50,000 people were sleeping in city homeless shelters in 2013, an all-time high and a 61 percent rise since 2002, according to the Wall Street Journal. Mary Brosnahan, president of the Coalition for the Homeless, recently described homelessness in New York City as a “crisis worse than anything we’ve seen since the Great Depression.”

Diamond defended his tenure in a statement Tuesday.

“While we have faced challenges at Homeless Services, the progress and improvements made to the system are undeniable,” he said. “Today we provide for clients in a modern and effective system, and are on the cutting edge of prevention programs to keep families from entering shelter.”

Included in Cuomo’s press release on the personnel hire, Bloomberg praised Diamond for having “led our effort to help more individuals and families in the shelter system connect with employment and work.”