European leaders sounded the alarm on youth unemployment Tuesday, and called for more assistance for businesses to help them solve the problem that has left nearly one in four young people in Europe without a job.

At a conference in Paris Tuesday, French, Italian and German ministers warned that if high youth unemployment is not addressed, young people will lose faith in their governments and the European Union.

“We now have to rescue an entire generation of people who are scared,” said Enrico Giovannini, Italy’s labor minister. “We have the best-ever educated generation in this continent, and we are putting them on hold.”

EU countries have struggled to tackle the problem. Budget cuts imposed to control outsized deficits — which have cut thousands of public-sector jobs and left little money for economic stimulus or employment programs — have only exacerbated youth unemployment.

Many countries with the worst unemployment problems, like Greece, Spain and Italy, are implementing labor market reforms that should eventually spur growth and create more jobs by making it easier for companies to hire and fire people — but they will take a long time to yield results.

The EU has already set aside funds, including 6 billion euros ($7.8 billion) for its “Youth Guarantee” — a commitment to getting every young person in the EU into a job, an internship or training within four months of their becoming unemployed. Another 16 billion euros in European structural funds are also available for youth employment projects.

But to tap the funds, countries need to come up with projects — and they have been slow to do so.

The French and German labor and finance ministers met Tuesday to come up with a plan to bring more urgency to the subject. In a joint editorial published in French and German newspapers Tuesday, they warned that “elevated unemployment that (young people) are enduring is a social, economic and political threat.”

Few details have come out of the meeting, however, and much of the plan seems to be a repackaging of old promises. A statement following it said a full plan should be unveiled and adopted at the European Summit at the end of June.

At the conference in the morning, the ministers also said that one of the major components of their plan has to be ensuring that small businesses have everything they need to grow — and hire.

Small and medium-sized businesses, which employ the vast majority of young people, have complained that since the global economic meltdown in 2008, gaining access to loans has become increasingly difficult. In 2008, the youth unemployment rate for the EU stood at just 15.8 percent.

The ministers said that they are working on establishing a special credit line for these small businesses from the European Investment Bank, which will have a 70 billion euro lending capacity this year.

Increasing the lending capacity of the EIB has been seen as an important way to help restart growth in Europe. But Werner Hoyer, EIB president, joked Tuesday that his bank is the biggest — but also the least-known — bank in Europe. He warned the money can do no good if businesses don’t know to ask for it.

Hoyer also noted that more needed to be done to bring down the high interest rates charged to companies in struggling countries. A business in northern Italy, just a few miles from the Austrian border, would pay two-and-a-half times the interest rate as one just over the frontier, he said. That kind of gap is unsustainable and weighs on the ability of businesses in the countries where jobs are needed most to compete.

Germany, which has faced criticism for spearheading Europe’s focus on austerity, has also pledged to help Spain specifically ensure better access to credit for its small and medium-sized companies — but few details have emerged.

The ministers are also pushing programs that would increase youth training and internships and help young people move around Europe.

While many countries face high unemployment, the European Commission says there are 2 million unfilled jobs across the EU, many of them in Germany. Leaders have proposed filling that gap by helping young people move around the region. One proposal includes expanding the continent-wide Erasmus program, which has traditionally given students grants to study abroad. They want it to also provide money to young people looking for internships or training abroad. 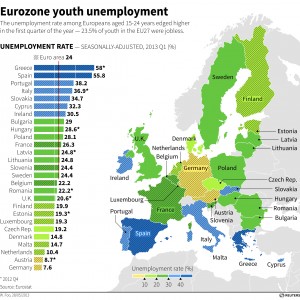