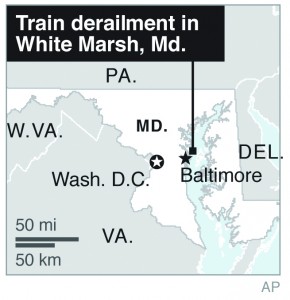 A CSX cargo train crashed into a trash truck and derailed Tuesday about 2 p.m. in White Marsh, about 10 miles northeast of Baltimore. The explosion that followed rattled homes at least a half-mile away and collapsed nearby buildings, setting them on fire, officials and witnesses said.

The Baltimore County Public Safety office told people that if they could see the smoke plume, they should evacuate the area, at least within 20 blocks. At least 15 cars derailed, said Baltimore County Fire Chief John J. Hohman.

Dale Walston said he lives about a half-mile away from the blast site and that the smell of chemicals is very strong.

“It shook my house pretty violently and knocked things off the shelves,” he wrote. The thick plume of black smoke was visible for miles, the smoke covering the eastern part of the city and drifting across the Baltimore city line.

Hohman said firefighters were letting the blazes burn out.

County executive Kevin Kamenetz told WBAL-TV that the truck driver was in serious but stable condition. The fire department said the two CSX workers who were aboard weren’t injured.

A worker at a nearby Dunkin’ Donuts, Tawan Rai, reached by The Associated Press by phone, said he saw a fire by the railroad tracks at first, then felt a thundering blast that sent smoke pouring into the sky.

“The whole building shook and there was just dust everywhere,” said Rai, adding no windows broke but he was surprised by the intensity of the blast. “I went outside and people were rushing there, the police officers, fire trucks.”

John Kane, treasurer of Atlantic Tire on nearby Pulaski Highway, said the explosion blew out two large showcase windows and light fixtures in his shop. The highway, also called Route 40, is shut down to the Baltimore city line as well as some side streets in area.

The National Transportation Safety Board said it was sending a team to investigate.

The derailment is the third serious one this month. In Bridgeport, Conn., on May 17, more than 70 people were injured when a commuter train derailed. The eastbound train from New York City went off the tracks during evening rush hour, came to a stop and was struck about 20 seconds later by a westbound train.

In Rockview, Missouri, on Saturday, a cargo train crash injured seven people and destroyed a highway overpass that could take a year to repair.

CSX shares traded higher Tuesday before the derailment was reported. The shares closed down 20 cents at $25.30.

This article appeared in print on page 7 of the May 29th, 2013 edition of Hamodia.