Twenty-six  years later, law enforcement officials have reopened the investigation into the unsolved murder of Chaim Weiss, z”l, a 16-year-old yeshivah bachur, on a chilly October Shabbos in 1986.

At a press conference held Tuesday morning, Nassau County’s top political leadership and police brass announced a $25,000 reward from Crime Stoppers for information that leads police to the perpetrator, along with an assurance of complete anonymity to anyone who provides the information.

Rick Capece, the county’s chief of detectives, pleaded with the public to come forward with information despite understandable reservations to cast suspicion on innocent people.

“A homicide has occurred,” he said, “and we need any information that could help solve this case, and bring justice and peace to the Weiss family.”

Chaim, a well-liked bachur attending the Mesivta of Long Beach, was found dead on Shabbos morning, a tragedy that rocked the community and left a Staten Island family bereaved and grasping for answers as they mourned their young son and brother.

“There’s somebody out there that knows a secret,” said Lt. John Azzata, commander of the Nassau County Police homicide squad. “I’m looking for that person to give me that secret.”

Crime Stoppers (see box on this page) is a national crime-solving organization that abets police efforts to find criminals in hard-to-solve cases. Secure in the total anonymity that Crime Stoppers provides, thousands of people have stepped forth in the past with information that often proved helpful in apprehending criminals.

Azzata said that they have already received several new tips from the publicity surrounding the case over the past few days. But it is unclear whether any new information has come up to prompt the reopening the case.

“This is one of our cold cases — we systematically go through cold cases,” he said. “Mr. Weiss came forward to us … and we felt that we want to get more information.”

Anshel — or Anton, as he was introduced by Edward Mangano, the county executive — Weiss made a brief statement pleading for help before saying that he would not comment further.

“My wife and I would like to thank the county executive and the police department of Nassau County for reopening the investigation of our dear Chaim, alav hashalom,” Anshel Weiss, who lives in Staten Island, said.

Although Chaim today, 42 years after his birth, would probably be on the verge of marrying off children of his own, to his parents and family he will forever remain the fresh-faced 16-year-old.

But the Weisses crave the closure on the tragedy that can only come about by bringing the murderer to justice.

“It has been over 26 years since our son was murdered,” Mr. Weiss said. “I’m reaching out to the public and appealing to anyone — his friends, schoolmates and classmates, who by now are married, are parents of their own, and understand what it means to be a parent.”

The Nassau District Attorney felt that the productive way to gain the community’s cooperation and trust was to involve the Orthodox community directly.

Which is what brought Gregory Quinn, a 40-year veteran of the Nassau County police homicide division, and James Carroll, the lead detective in reopening the Weiss files, to Hamodia last Thursday.

“We need you,” Quinn said at the meeting with Hamodia.

The yeshivah seconded the DA’s call, urging anyone with knowledge to come forward, in a statement released to the public on Tuesday.

“The Mesivta of Long Beach applauds the perseverance of the Nassau County Police Department as it commences the reinvestigation of the tragic but unsolved murder of Chaim Weiss in November 1986,” the release read.

“We at the Mesivta have met with the Police Department and pledged our full cooperation in the investigation. We encourage all who have relevant information that could prove useful to the investigation to extend their full support to this process.”

The circumstances that occurred that night on the third floor of the dormitory, located in an island of Torah situated on a peninsula itself jutting out of the Long Island peninsula, are shrouded in mystery.

Chaim, then in the Mesivta for two and half years, was described by family members and friends as a popular boy who was keen in his studies.

“He was a very intelligent young man, with friends; he had a wit,” Quinn said, adding in law enforcement jargon that “he had no known enemies.”

It was on Nov. 1, 1986, which came out on a Shabbos. On that Friday night, Chaim retired to his room late. He had been feeling under the weather and was taking antibiotics for a bad case of bronchitis. He wanted to read but since it was Shabbos when he could not turn on the light, he sat in the hallway reading a book until 1:00 a.m., a common practice among dormitory boys. It was the last time he was seen alive.

When Chaim did not come to Shacharis, the dorm mashgiach went to check up on him. Opening the door to Chaim’s room, he was horrified to discover that Chaim’s neshamah had already been summoned to the Heavenly court, apparently sometime between 1:00 a.m. and 7:50 a.m.

Police believe the murderer was familiar with the layout of the building and knew that Chaim was one of only two students in the dormitory who slept in his own room.

Don Daly, a senior detective in Nassau County police’s homicide squad, was at the scene within ten minutes of the discovery and quickly began gathering details.

None of the talmidim reported hearing anything throughout the night, although one boy said he woke up in middle of the night to see his door opening slightly and then closing. But the boy himself was not sure how wakeful he was at the time. He also said that it might have been his roommate who had gone to sleep after him.

Detective Vincent Garcia said that there were some hairs and other things which he declined to identify that may be used for DNA evidence. While in 1986 it was considered unviable to extract evidence, it may be usable now. But he said that testing for DNA destroys the evidence, and “I’m unwilling to destroy that evidence until I’m sure.”

One clue came when a jogger reported seeing an unidentified individual sitting at the beach several blocks away from the yeshivah early that fateful morning. But all efforts to find out who that individual may have been have proved unsuccessful.

Vincent Garcia said that police are still looking into all possibilities, including one theory involving a janitor in the building, described as troubled, who was no longer employed soon after the tragedy. He had an alibi at the time but has since returned to his native Poland. Police have questioned him and are continuing to speak to his family, since he is no longer alive.

Although a polygraph test was administered to most, if not all, of the staff and students on a voluntary basis, not a shred of additional information came out of it.

The questions asked at the time remain to this day. Sadly, no one has come forward with a clue, an idea, an answer, even an untoward occurrence that they saw, even if it may have no significance.

Do you know something? An anxious family is waiting for you to contact Crime Stoppers and share whatever information you may have, even if you believe it has no significance. 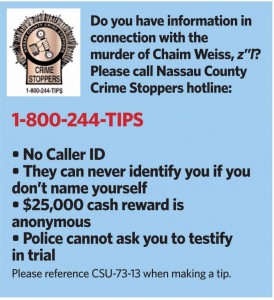 This article appeared in print on page 4 of the May 29th, 2013 edition of Hamodia.

The Inequality of Equivalency?